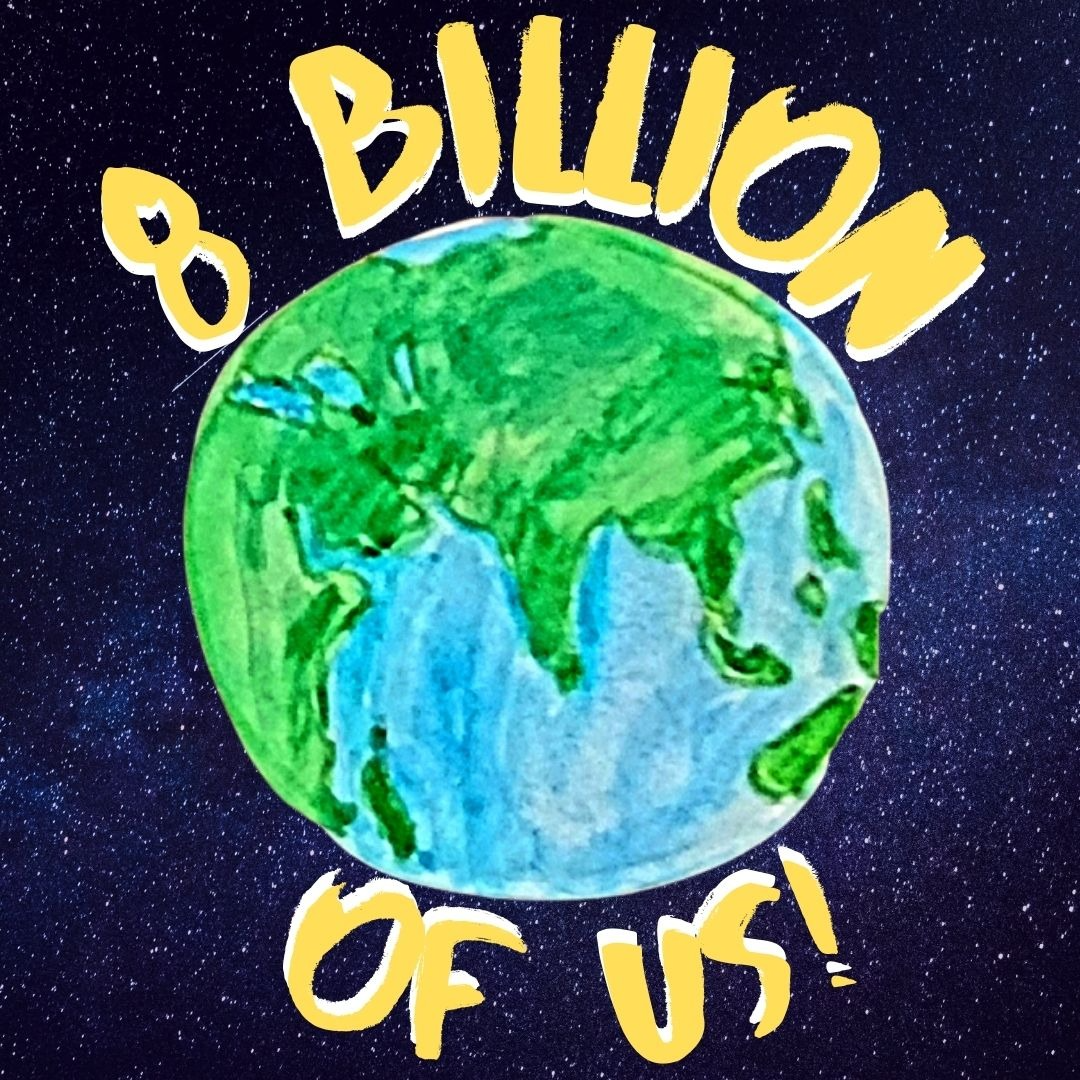 LEELA: This week – our crowded earth, the longest train, art in Ukraine, another Tay-tay sweep and braided beards!

I hope you’ve got your seatbelt on because there is a LOT happening in the world this week.

Like the bulging number of earthlings for a start.

Never mind the longest train in the world, you won’t believe how many carriages it contains.

And ever heard of graffiti artist Banksy? Well, he’s left his mark on bombed-out Ukraine.

And talk about bonker-brain beards. Wait till you hear what facial hair fans do to make the longest beard.

LEELA: I’m your host Leela Sivasankar Prickitt and, as ever, I’m joined by the big story explainer and sound effects finder – otherwise known as my… mama!

MAMA: Ah! The sound of another baby being born, entering this world, populating our planet.

MAMA: Sure are! And just how many babies do you think are being born on average every minute of every day all over the world?

MAMA: Sure is. It’s a lot of mouths to feed too… And well on Tuesday Earth hit a monumental milestone, as in a marker, of our planet’s history, the world’s population reached 8 billion people.

LEELA: That’s a LOT of people. And 1.4 billion of them live right here in India.

MAMA: Sure do – a place the third of the size of America but with four times the people.

MAMA: Yep. And right now, China is the most populous country, but India is likely to surpass or go past by next year.

LEELA: You mean it’s going to get more crowded?

MAMA: Ah-huh. Not just us but the whole planet. And, get this, the United Nations say 1 billion people – have been born just in the last 12 years like, you, Leela!

LEELA: But why these 12 years?

MAMA: Well, improvements in public health, nutrition, even personal hygiene, and medicine mean people are living longer. The good news is those things also mean people – over time – begin to have fewer children. So – get this – some countries actually have a declining population rate.

MAMA: Yes, we heard a lot about that in the pandemic, didn’t we? But it’s also happening a lot in Eastern European countries too, according to the World Population Review. So even though the global population is reaching new highs, the growth rate is steadily falling.

MAMA: Still – it’s a lot of pressure on our sweet, rich planet of Earth.

LEELA: Which stands for the Conference of Parties – which is a big discussion about climate and how to stop global warming.

MAMA: Yes, it’s wrapping up in Egypt right now. But SOME of the delegates who’ve attended are being criticized for the 400 private jets at their service to fly them home.

LEELA: What?! That’s pretty hypocritical. I mean, why couldn’t they share a plane like the rest of us do?

MAMA: Tell me about it. But in case we have some listeners who don’t know – what is a hypocritical mean?

LEELA: It means being a hypocrite – as in someone who says one thing but does another.

MAMA: Right – hypocrisy is when someone acts in contradiction to their stated beliefs or feelings. Now, speaking of greener, more environmentally-friendly travel – trains are often seen as one of the best ways to get about.

LEELA: Oh, nice slinky link into our next story, Mama!

MAMA: Thank you. So, you’ll never guess how many carriages a train in Switzerland travelled with, breaking the record for the longest-ever passenger train journey.

LEELA: I think for this we need to cut across to our new correspondent, Avani Jade Prasad, who just happens to be half Swiss.

MAMA: And happens to know a thing or two about trains in that beautiful Central European country.

LEELA: Well then, over to you, Avani.

So many of us have been on trains before, right?

Well, have you ever walked from one end to another, like to the carriage selling snacks?

It can be a loooooong walk, right?

Going through – on average – ten, maybe even twenty carriages.

So, imagine a train with a HUNDRED carriages!

Well, a Swiss railway company has done just that.

It set the record for the world’s longest passenger train.

With a hundred carriages, it’s over a mile long!!

It would take around 10,000 cars to transport the same amount of people.

So, it’s much better for the environment too!!!

And what a beautiful journey it was twisting and turning through the beautiful Swiss Alps, going through several countries including Italy, Germany, France, and Switzerland of course.

But sadly, it was a one-time-only special journey, celebrating train travel after two years of the pandemic.

Still, I’d say it’s on the “right track” to an environmentally friendly world!

LEELA: Thanks, Avani. I agree, we are on the right track.

MAMA: The war between Russia and Ukraine intensifies as missiles land in nearby Poland. Russia’s defence ministry denies it was behind the blast and accuses Ukraine of trying to escalate – or increase – the tension.

In the US election, Republicans got more seats in the House of Representatives, but Democrats retained control of the Senate. And… former President Donald Trump announces he will indeed be running for president in 2024.

Amazon founder Jeff Bezos is promising to give away most of his $124 billion dollar fortune over the coming years helping fight climate change and reduce inequality. He now joins US investor Warren Buffett and Microsoft founder Bill Gates who’ve also promised to give away their fortunes.

And Israeli archaeologists find an ancient comb – we’re talking 3,800 years old – with an inscription carved into it in what’s likely to be the oldest known full sentence in Canaanite – thought to be the world’s oldest alphabet.

LEELA: As ever thank you for that… whippity-whappity-zippity-zappity wrap of what’s making headlines elsewhere in the world, Mama.

MAMA: Do you know what graffiti is?

MAMA: Yes and no. I love that you see it as art. And a lot of it is. But some don’t because some aren’t.

MAMA: Technically, it’s actually writing, or drawings scribbled, scratched or sprayed illicitly on a wall, or other surfaces, in a public place.

MAMA: Ah, illicit means forbidden – usually by law, or the rules or customs of a place.

LEELA: So, all that street art near us is illegal?

MAMA: Actually, no – the government commissioned, or paid people, to do that.

MAMA: So, in the last 20 or so years there’s been a shift in public opinion – people started realizing how stunning a lot of graffiti really was and started considering it art.

LEELA: His stuff sells for millions! Well, when you can take down the wall he’s spray-painted and sell it, that is.

MAMA: Good point. Well, he’s at it again. Seven new murals of his have appeared in Ukraine – no less.

MAMA: Yeah. And not for the first time, either. He’s posted three of his new pieces – painted on bombed-out buildings – on Instagram and has now confirmed four more are his also.

LEELA: Wow – that must be a real treat for the Ukrainians.

MAMA: Yes, many are grateful that the artist is highlighting the damage done by the Russian invasion. And, of course, we’ll have a link to photos of the art in our transcript.

LEELA: Hold on though – that’s not the only entertainment news, is it?

MAMA: You’re such a Swifty! Give us the news, then.

LEELA: Well, Tay-Tay’s talent knows no end. I’m of course talking about singer Taylor Swift, who swept the MTV Europe Music Awards just held in Germany.  She picked up not one or two or even three – but FOUR awards.

MAMA: But she didn’t take home the Biggest Fans Award.

MAMA: And finally, let’s see what the lucky dip machine has for us this week.

LEELA: Odd, oh, yes. So, what do a bunch of men with long beards like to do when they’re together?

MAMA: Ummm, pretend to be Santa?

LEELA: Hmmm – possibly. But the wrong answer. They compare their whiskers, of course. Apparently, it’s a thing. So much so that every year beard boys, ok, men, get together in the US northern state of Wyoming for the National Beard and Moustache Championships.

MAMA: Oh, so they’re not just comparing, but they’re competing?

MAMA: And the categories are???

LEELA: Like the “longest goatee…”  You know, the hair on your chinny-chin-chin, the pointy beard cut like a goat’s chin hair – hence the name.

LEELA: That’s the one.

MAMA: So how long was the longest goatee?

LEELA: Yep! Though the competitive spirit was in the air, so was teamwork. Or national pride. You see, they realised so many bearded dudes showed up at this event that they had the chance of beating the record for the LONGEST beard chain, presently held by Germany.

LEELA: I like to call it a beard braid. Because that’s what they did – all stood side-by-side and braided half their beard with the guy on the right and half with the guy on the left to make a beard chain that measured 150 feet, or 45.7 metres — more than double the Germany record.

LEELA: They weren’t bonded… but “bearded together.”

MAMA: Well, I wonder how healthy all these men were?

LEELA: Huh?! What’s health got to do with it?

MAMA: Well, in England in the 1800s doctors prescribed beards as a way to prevent illness, reasoning that a thick beard could act as a filter trapping harmful particles before entering the body through the mouth.

MAMA: FAB FACT NUMBER 1 – Earthlings, we’ve reached a major milestone – there are now more than 8 billion of us living together on this planet. That means, on average how many babies are born every minute?

LEELA: FAB FACT NUMBER 2 – Next year India is set to take over what country as the most populous nation on Earth?

MAMA: FAB FACT NUMBER 3 – As the big climate summit, COP27, wraps up, attendees are criticised for hypocrisy after 400 private jets arrive in Egypt to take them home.  What is hypocrisy?

When someone acts in contradiction to his or her stated beliefs or feelings.

Illicit. As in forbidden and illegal.

MAMA: FAB FACT NUMBER 5 – A bunch of bearded men tied their beards together to break the world record with their (or 46-metre) long beard chain.

When were men prescribed growing beards as a way of staying healthy?

LEELA: And that almost brings us to the end of this episode of Newsy Pooloozi!

MAMA: Thank you, “Little Gamer” for the awesome message you left us on Apple Podcasts in India.

LEELA: You said:  “I like this podcast because it’s really interesting with all the information and they give me all the latest fun stuff they share on the episodes.” Five stars!

MAMA: Thank you, thank you –

BOTH: (Singing) Thank you!

LEELA: What about the rest of you? Go on – leave us a review so we can read yours too!

MAMA: It reallllly helps others find us – so we’re deeply grateful if you can do this. And think of the good karma you’ll get.