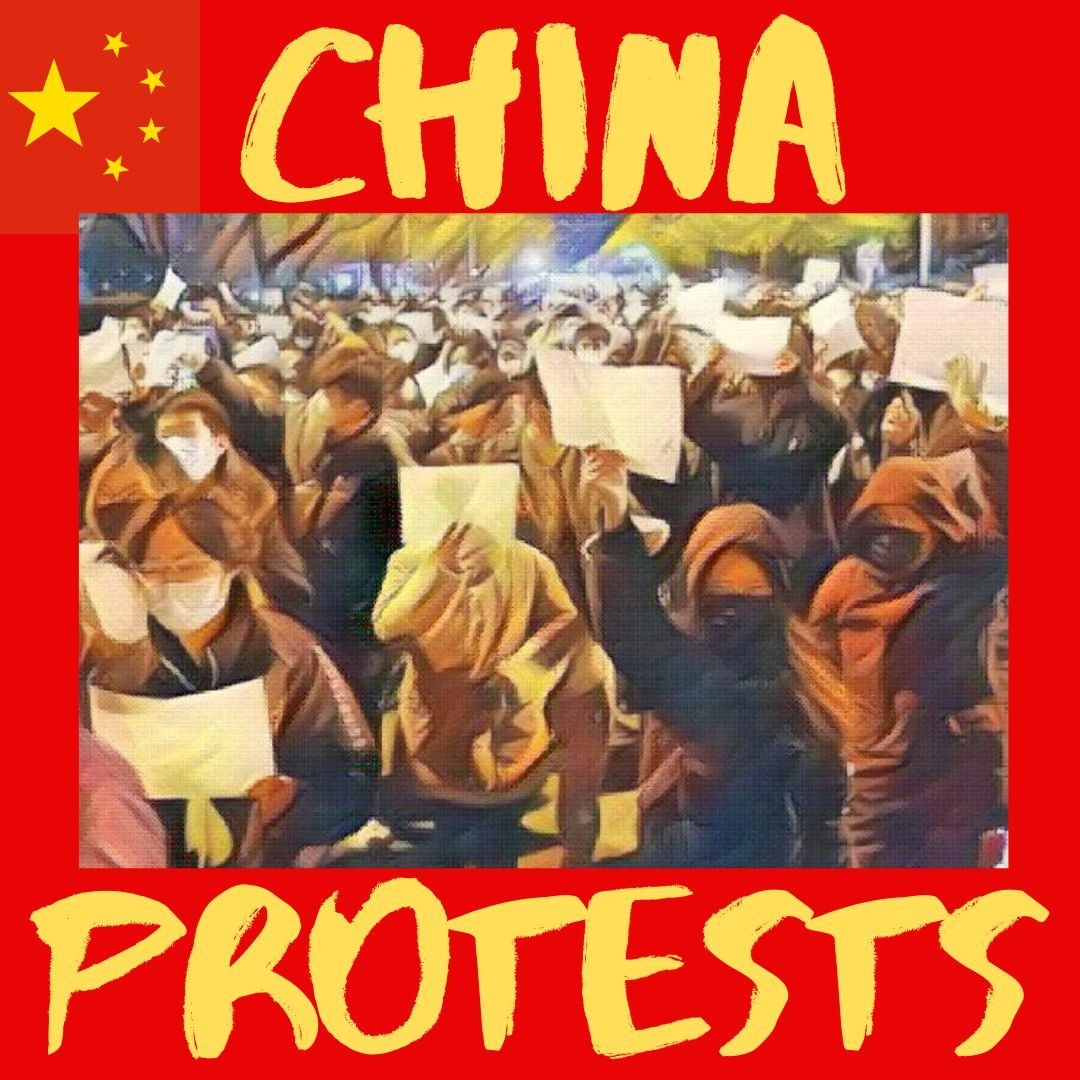 And – yes – I have a cold… but I promise not to cough in the microphone.

MAMA: She’s joined by me – the producer of this podcast and Leela’s mom, who might not let her speak too much this week…

LEELA: I’m fine…! Just listen to me do the headlines –

This week we’ll tell you why the protests in China are remarkable and what those blank sheets of white paper have to do with it.

Two young inventors create a machine that not only recycles plastic but creates 3D printer filament out of it. No idea what that is? Listen and you’ll find out!

Plus gardeners and animals alike are confused in England as spring blossoms are coming early.

And find out who’s helping a New Zealand island get rid of its rat problem.

LEELA: Dive on in with the…

MAMA:  So you’ve maybe been hearing a lot of adults talk about China this week or seeing pictures or videos of people there protesting and may be then been thinking

LEELA: What’s the deal with the white paper?

LEELA: Why are some people holding up signs of some maths equation too?

LEELA: What’s the big deal about a few small protests anyway? Someone is always protesting about something, somewhere in the world!

MAMA: Right. Let’s start with that one first. you’re right, people protest all the time in democracies. What’s democracy again?

LEELA: Power of the people: a form of government where everyone has a say as in…  everyone gets a vote.

MAMA: And an authoritarian regime on the other hand is what…?

LEELA: The opposite. Only the person at the top – like a dictator or a panel of rulers – has power. So people aren’t free.

MAMA: Bingo. And do those authoritarian governments like it when people take to the streets to voice their anger over how they’re being ruled.

MAMA: Well, just like the protests for women’s freedom in Iran which are still going on, lest we forget that’s why protests in China are a BIG deal. Last time people took to the streets in large numbers in the Chinese capital Beijing in Tiananmen Square , it was 1989. Troops armed with guns and tanks crushed the pro-democracy rally, killing hundreds, or maybe even thousands of protests. No one knows for sure.

LEELA: So like in Iran these protestors are super brave.

LEELA: How did it all start anyway?

MAMA: Well, some say the Chinese people couldn’t believe the pictures coming out of the World Cup – where it’s clear the pandemic is over and very few people are bothering to wear a mask. But in China, they’re still under tough COVID measures.

LEELA: What? They still have to wear masks?

MAMA: And where they go is restricted. But then, sadly, there was a fire in a high-rise apartment block in western China, where some ten people died. It’s thought they couldn’t escape the blaze because of the Covid restrictions, though local authorities deny this.

MAMA: So at candle vigils and memorials for the victims many came clutching a white sheet of paper.

MAMA: Well, some say the white paper symbolises their silent blank voice. But others say it’s a direct challenge to authority by holding up a blank piece of paper, they say they surely can’t be arrested because they are saying nothing.

LEELA: Whoaaa… so the white paper is like this big silent but powerful message.

LEELA: But aren’t there some people who have some mathematical equation on their paper.

MAMA: A few braver ones, yes. At Tsinghua University. Again it’s code, right. They can’t come out and say something outright.

LEELA: What’s the formula mean, I mean what’s it code for?

MAMA: Well, it’s the formula that’s important, it’s that the equations are from a guy called Friedmann.

MAMA: No… It’s not. Though there are some increasingly finding their voice, the police are moving in to deter them and the government is trying to take the words: protests, white paper, Friedman off social media.

MAMA: This is a wait and watch situation. So far world leaders are staying quiet.

MAMA: OK. First of all the inventor of this

SFX OF A VACUUM

LEELA: Got it. And the winner goes to…

SFX OF A DRUMROLL

MAMA: And guess what it turns the plastic into?

MAMA: Could be. Basically, it turns it into a 3D printer filament.

LEELA: Oh, is it the stuff that like the 3D printer melts into the object?

MAMA:  Yeah, pretty much. Although the official definition is: 3D printing filament is the thermoplastic feedstock for fused deposition modelling 3D printers.

MAMA: (laughs) You were right. Basically, imagine a roll of fishing line or super thin-thin ribbon but recycled plastic and in all different colours, which becomes the raw ingredient your 3D printer uses to make new things.

LEELA: Got it. So instead of using new plastic you’re using recycled bottles. Great. But still… Cue my mom here:

LEELA: That. I knew you were gonna say that.

MAMA: Dozens of earthquakes hit Hawaii as the world’s largest volcano erupts after being dormant, or inactive, for 38 years. Authorities say, so far the eruption is “confined to the summit” and isn’t threatening downhill communities.

Italy is cleaning up after a deadly landslide tore across the island of Ischia. It struck after days of relentless rain in southern Italy.

Social media giant Meta, otherwise known as Facebook, is fined €265 million euros or $277 million dollars by the Irish Data Protection Commission. Why? People’s personal Facebook data had been made available online in 2018.

The oldest known tortoise in the world is about to party. There will be a three-day birthday celebration for Jonathan the Tortoise who lives on St Helena island in the South Atlantic Ocean. How old, you ask? He’s turning a mere 190 years old!

LEELA: Thank you, Mama for that –

MAMA: For that whippity-whappity-zippity-zappity wrap of what’s making headlines elsewhere in the world!

MAMA: (Sings) “Spring is in the air. I can feel it everywhere.”

MAMA: Well, quite. It’s autumn up here in the Northern Hemisphere. So why on Earth –

MAMA: Are flowers and plants bursting to life in England where it’s well and truly supposed to be cold and frosty?

MAMA: Yes, at least that’s the news from our England correspondent, Jackson Hosking.

LEELA: Go on Jackson, give us the low-down on the unseasonal plant push-up.

This is the time of the year when parents like to say things like, “Don’t leave the house without your coat!” Or “Dry your hair before going outside!”

But this year’s been weird.

Usually there are just piles of yellow and brown leaves beneath the bare, deciduous trees.

Deciduous is the kind of tree that loses its leaves every autumn, in case you didn’t know!

But this year there are green shoots and bright flowers popping up.

Yeah, that’s not supposed to happen until spring.

Now most flowers are supposed to be snug under the dirt, lying dormant – as in not active – until spring.

But the recent mild temperatures, as well as the wet weather, have encouraged some plants to burst back into life.

Now that might look pretty and all that, but as soon as the first frost comes – as is expected – they’ll all die.

And, no, they most likely won’t come back in big numbers in spring.

Not just that. But think about those insects that feed off them.

And the birds that feed off the insects.

In the south of England, I’m Jackson Hosking reporting for Newsy Poooolooooozi!

LEELA: Yikes! And all this after the hottest most unusual summer on record.

MAMA: As if that’s not odd enough, let’s head over to the Lucky Dip Machine and see what kind of story it spits out for us this week.

LEELA: Once upon a time, just the other day, an island at the southern tip of New Zealand – Stewart Island, also known as Rakiura – had a rodent problem.

You see originally there were no rats – so the birds evolved without pesky predators. But when rats arrived with humans, well, the eggs of many native birds were vulnerable… to be eaten by rats!

as for New Zealand’s beloved national bird – the adorable, bushy kiwi birds, well they can’t fly – did you know – which means… you guessed it: easy dinner for the rat-a-tata-tats!

Never fear – the rat-catchers are here.

LEELA: Who are not grisly old geezers with poison. Or even scientists with clever traps. Oh, no. These rat catchers are… kids! Yep, like us, listeners.

40 students from a school with the best name ever – Halfmoon Bay – caught more than 600 rats over a 100-day challenge.

Yes, of course it was made into a competition – I mean, who doesn’t like a good game?!

Each child was given their own trap – made out of recycled (get this!) political billboards.

LEELA: And an 11-year-old, called Bella, won the prize for catching… wait for it… 64 rats! The school also gave out awards for: the rat with the prettiest fur, the rat with the strangest tail, the rat with the biggest teeth and, of course, the largest rat – an impressive 45 centimetres long. That’s one foot and five inches, folks!

LEELA: Even the youngsters got in on the kill.

Bagging no less than 60 rats was a… five-year-old.

The things we do for birds, eh?!

MAMA: FAB FACT NUMBER 1 – Police are moving in to deter the growing protests against COVID restrictions in China. The protests are a big deal because China is ruled by what kind of a regime?

LEELA: FAB FACT NUMBER 2 – And when and where was the last major protest that was crushed in China?

MAMA: FAB FACT NUMBER 3 – Two young inventors have created a machine that recycles plastic bottles and turns them into the thermoplastic feedstock for fused deposition modelling 3D printers – in other words material the 3D printer needs to make things, which is also called what?

LEELA: FAB FACT NUMBER 4 – Unseasonably warm weather in the UK means flowers are starting to appear early in what’s being called a second spring. What is the word for flowers and plants that aren’t usually active during winter?

MAMA: FAB FACT NUMBER 5 – A school in an island in the south of New Zealand runs a rat-catching competition to rid the island of the pests and save the national bird, which is?

LEELA: And that brings us to the end of this podcast.

MAMA: If you enjoyed this dip in the coolest pool of news and information then HIT that subscribe button on Apple Podcast, Spotify, Stitcher, Alexa or wherever you get your podcasts. While you’re at it… Give us a good rating. Or better still, leave us a review! Go on – we’ll read it out loud if you do…