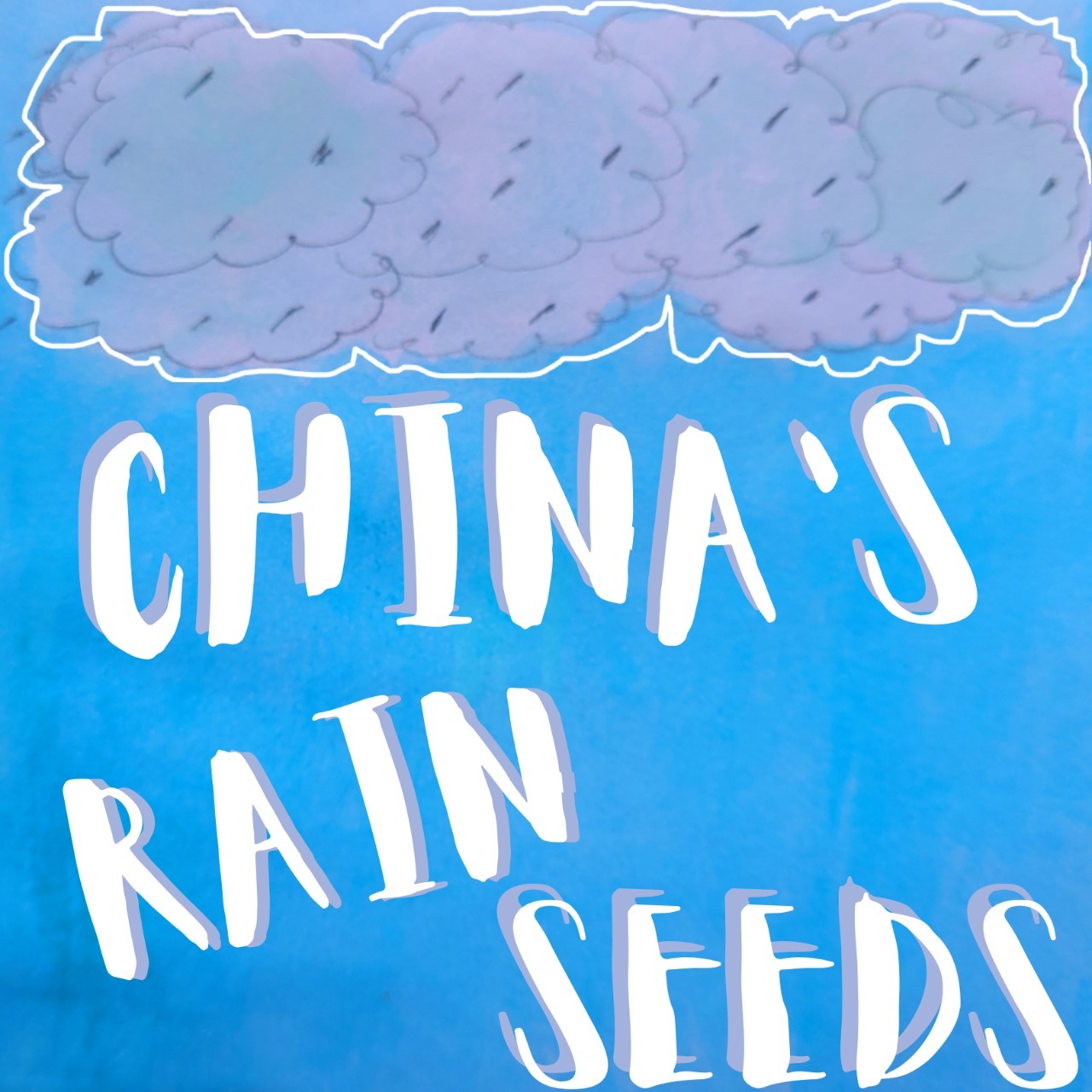 LEELA: Hello and welcome to Newsy Pooloozi – the news pool for curious kids and adults! I’m your host Leela Sivasankar Prickitt and, as ever, I’m joined by the big story explainer and sound effects finder, otherwise known as my Mama.

LEELA: And this week on Newsy Pooloozi…

We give you the low-down on seeding clouds to make rain, confused? Bet you won’t be if you keep listening.

We’ll also tell you all about Japan’s robotic goat, the new theory of how earth got water and the crazy way sea sponges get rid of toxins.

LEELA: But first, it’s time for…

MAMA: So it seems like the theme of the summer is…

MAMA: From the US to Europe, here in parts of India and, well, China and Japan too.

LEELA: It’s so hot in China that not only are crops wilting and rivers drying up.

MAMA: Sparking a shortage of hydropower and electricity.

LEELA: Yep, but shipping is also halted and major companies are suspending their operations too.

MAMA: No, not that either. But these.

MAMA: OK, not exactly.  More like finger-sized capsules of iodine or salt-and-mineral-filled bullets shooting into the sky.

MAMA: Not really. Most experts agree these “rain seeds” as I like to call them are pretty harmless.

MAMA: So, since next week is crucial to whether or not crops can survive in China, authorities there are taking emergency steps to ensure the autumn grain harvest. Which, by the way, is 75% of China’s annual total. And if this doesn’t work it could have a global impact on food supplies.

LEELA: Yeek! But – well, how exactly does this rain seed business work, anyway?

LEELA: Even in hot, dry areas?

MAMA: Yep. There’s usually some water suspended in the sky. Before it rains, water droplets in the air condense and cool –

MAMA: On tiny particles, like dust, forming clouds. But once they grow large and heavy enough, they fall, melting along the way.

MAMA: Correct. Well, cloud seeding operates on the same idea: by injecting chemicals into clouds to lower their temperature – give them more material on which to condense – experts believe it speeds up the process, causing it to rain sooner than it normally would.

LEELA: And does it?

MAMA: Well… to be honest, there is not conclusive – as in the be-all-and-end-all – evidence to prove this just yet, so some have their doubts.

LEELA: But still, Chinese planes will fire these salty rods into the sky to try?

MAMA: Mmmhmmm. And they have tried this before. In the 2008 Olympics China claimed to have cleared the skies by forcing the rain to come early.

MAMA: Now let’s have the latest

LEELA: Breaking news everyone – we may be alive today thanks to water that might have come from an asteroid.

LEELA: In a quest to shed light on the origins of life and the formation of the universe, scientists at Japan’s national space agency have been analyzing precious samples collected on a six-year Japanese space mission.

MAMA: After scrutinizing or really carefully going over – material brought back to earth in 2020 from the asteroid Ryugu, the scientists found organic material which showed…

LEELA: That some of the building blocks of life on Earth may have been formed in space!

LEELA: While this is a big and interesting discovery, most scientists think even if this asteroid did land on earth it probably wasn’t the only source of volatiles to come here.

MAMA: Yeah. And speaking of water… A new map is showing the location of where flowing rivers and lakes most likely were on Mars. Thanks to this deep analysis, called spectral analysis, from the European Space Agency, future astronauts will know the ideal places to land for optimum scientific research on the red planet.

MAMA: It’s official – according to the Global Drought Observatory, two-thirds of Europe is experiencing the worst drought in 500 years. And the soil on almost half of the continent is drying up.

Speaking of heat, these hotter conditions are confusing Africa’s migratory birds and stressing out bees all over the world. Scientists studying bumblebee wings found that they could link signs of stress to when conditions were hotter or wetter.

In happier news…  a study conducted by Japanese researchers revealed that dogs get emotional and cry when they reunite with their owners. Why? Well, technically it’s about the release of oxytocin, the happy hormone but in practical terms the pooches are just so excited to see you they cry happy tears.

India’s Chess Grandmaster – 17-year-old R Praggnanandhaa beats the world chess champion Magnus Carlsen. Again. Despite the win, Pragga bagged second place in the FTX Crypto Cup since Carlsen had a higher overall score. Still, both players are said to have experimented and had fun.

And finally, are you someone who listens to music while you study? Well, you probably have a higher-grade point average, according to a new study by OnePoll. Others listen to nature sounds, real-life noises and even podcasts (wahoo) because they can’t study in silence.

LEELA: As ever, thank you so much for that whippity-whappity-zippity-zappity wrap of what’s making headlines elsewhere in the world, Mama.

MAMA: As ever – it’s my pleasure. Now… more news from Japan but this time it’s…

MAMA: So, when you think of Japan and tech what’s the first thing that comes into your head?

MAMA: Bingo. And another thing Japan is known for, sadly, is its dwindling population.

MAMA: Exactly, you know where I’m going with this, don’t you! Considering the aging population of Japan, Kawasaki Heavy Industries company has created this.

SFX OF A GOAT

MAMA: Named “Bex” in fact – this four-legged robot with wheels for feet looks kind of like a white goat. It can be used to carry heavy loads for farming, moving cargo or just groceries and, yes, humans can ride it too.

MAMA: It drives it on perfectly paved roads or uneven surfaces like hills, fields or even potholed roads.

MAMA: Yeah, kinda. But you know in a robotic, goat-like way.

LEELA: Forget about the Ford Model T – you know, the first affordable automobile in the world – this is the “Goat T.” Get it?

LEELA: Odd and snotty. Or do I mean spongy?

LEELA: Well, despite not having nerves, muscles or even brains, sea sponges have a certain power.

LEELA: Errr, no.  I wouldn’t go that far. I’m talking about this.

LEELA: That wasn’t me. It was the sponge.

LEELA: Yes, sponges – not the ones you use in the kitchen to clean your dishes with, but sea sponges found in, yes, the sea – can sneeze!

LEELA: OK, OK, not that kind of human sneeze, I admit. Sea sponges take like half an hour to do this.

SFX OF SNEEZE IN SLOW SOUND

LEELA: Oh, you get the drift.  They might take forever but the purpose is the same – to eject waste.

LEELA: Oh,  their ability to eject clumps of mucus from their bodies in a sneeze-like way is well known, but exactly how they do it was a mystery, until now. Thanks to scientists from the University of Amsterdam.

MAMA: Oh, oh – looks like we’ll have to go to our Amsterdam correspondent, Tofunmi Fagade, for more on this story.

If I say sponge, I bet you think of:  a simple aquatic creature with dense skeletons, which are very porous – as in lots of holes.

Holes that are really good at soaking things up, right?

Yes, our ancestors really did use dead sea sponges to soak up things.

Today, though, most sponges found in kitchens and bathrooms are synthetic, human-made.

So, what you probably don’t think of when I say “sponge” is snotty, right?

Because that’s exactly what marine biologists at the University of Amsterdam have found.

They captured time-lapse video and saw the sponges making a sneeze-like contraction, or movement inward, and then –

Then they saw tiny specks of snot exiting from the sponges in what they described as… a “mucus highway.”

Well, actually, it’s not only part of their cleansing process – which most creatures on earth do, but it’s some cool upcycling too.

About a fifth of their snot is rich in carbon and nitrogen, making it good for other animals like shrimp to eat.

LEELA: Yick, indeed. Still, thanks for that snot-shot of news, Tofunmi.

MAMA: FAB FACT NUMBER 1 – China plans to shoot rain-generating chemicals – rain seeds – into the atmosphere to make it rain and save its autumn harvest. What is these finger-sized rain seeds made of?

LEELA: FAB FACT NUMBER 2 – Speaking of China’s harvest – how much of its total annual harvest is the autumn crop?

MAMA: FAB FACT NUMBER 3 – The delivery of volatiles to the Earth has long been the subject of hot debate, now some think water may have been brought to Earth by the Ryugu (pronounced: rai-you-goo) asteroid. What are volatiles in this regard?

LEELA: FAB FACT NUMBER 4 – Scientists at the University of Amsterdam discover how sea sponges get rid of mucus from their body. What is a sea sponge?

A simple aquatic creature with dense skeletons that are very porous – as in LOTS of holes.

MAMA: FAB FACT NUMBER 5 – About a fifth of the snot that sea sponges eject is rich in what elements that make it appealing for other animals like shrimp to eat?

LEELA: And that brings us to the end of this episode of Newsy Pooloozi!

LEELA: If you enjoyed this dip in the coolest pool of news and information then do subscribe to our podcast on Apple Podcast, Spotify, Stitcher, Alexa or wherever you get your podcasts.

MAMA: While you’re at it… Give us a good rating. Or better still, leave us a review.

LEELA: Pretty please… think of the good karma you’ll get! Alrighty then, we’ll see you next week in the happy, splashy giant Newsy Pooloozi!