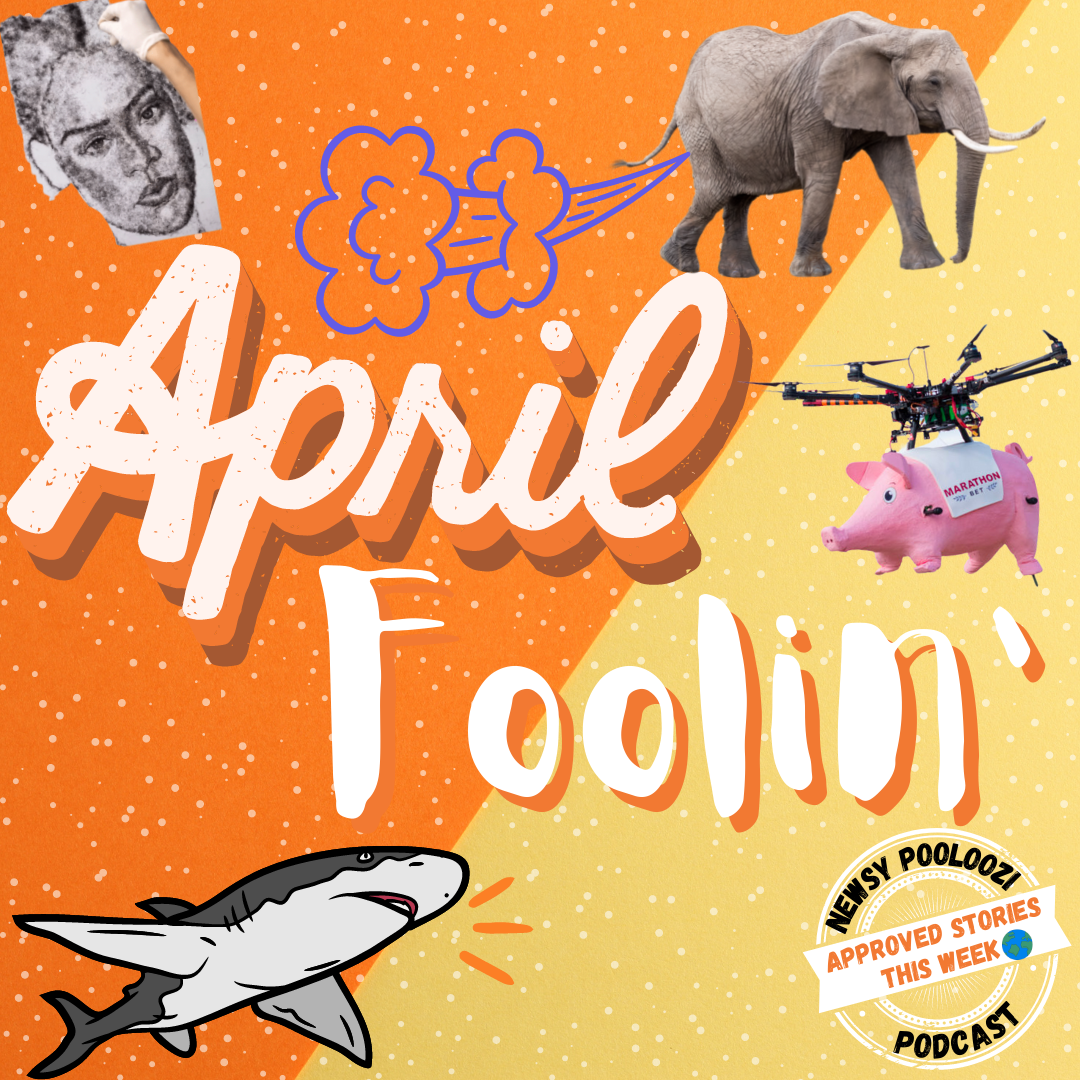 Five wacky world news stories – one that will fool you

Take our April Fool’s challenge – hear five wacky, world news stories and guess which one is April Foolin’ you!

LEELA: Hello and welcome to Newsy Pooloozi – the news pool for curious kids and adults! I’m your host Leela Sivasankar Prickitt and…

MAMA: I’m her producer and Mama. And we have some huge news, don’t we?

LEELA: Yes, we do. Now don’t be mad at us folks, but after a lot of consideration.

LEELA: Oh, yeah. Deep breaths… We have decided this –

MAMA: Sorry! We couldn’t resist. In fact, if anything there are some plans afoot to be expanding into other realms… But, don’t worry, we’re not putting down our microphones, folks.

LEELA: We’re not gonna stop search’n for the wackiest –

MAMA: And most worthy –

LEELA: world news stories to bring to you. Oh, no!

MAMA: But we do need a break!

MAMA: I’m exhausted. I gotta another job, you know. Plus I’m a mom. My body says I need a break. So, we’re gonna take it a little easy this week. A little break before my body breaks.

MAMA: Whatever you wanna call it. But we know the news doesn’t stop.

MAMA: So back by popular demand, though more in the style of a speedy news round,  we’ve got five factual stories and one that will fool you.

LEELA: Can you guess which one it is???

MAMA: Without consulting Google for help!

LEELA: Hands off your device. No Google. Ears only.

LEELA: Let’s do this.

MAMA: First up. So you’ve heard the expression, “If pigs could fly,” right?

MAMA: Well they do in India! Or at least one did.

MAMA: OK, OK – it was with the little help of drone, but still.

MAMA: This one sure was – 485 pounder – or 220 kilograms. But that was the point – to prove the drone could take the weight of a fully grown human, as drones are said to be the taxis of the future. And now that the Indian government has relaxed the laws about operating drones last year, nearly a dozen drone companies are poised to “take off.”

MAMA: Of course, the pig on board was just a PR stunt, that means a way of getting attention, from a Bangalore drone company.

LEELA: And it worked.

MAMA: Sure did. I mean it’s not every day you can post that kind of a video with a voice over saying: drones will only be taxis when pigs fly.  Well look what UrbanEagle Drones can do.

LEELA: You won’t believe what’s washed up on the shores of England.

LEELA: You heard me right.  Found on a beach in Cornwall was a rare species of called the Greenland shark, which is believed to be the longest living vertebrate – as in creatures with a spine – with some living up to 500 years. Scientists who studied the body say this 13ft (or nearly 4 meters) long shark was a female around 100 years old! Which pretty much means she was a teenager.

LEELA: Well, yes, that’s true. But this is one shark you won’t want to encounter. Some can grow twice this long, which means not only big teeth, but did I mention they are also poisonous?

LEELA: Scientists say Greenland sharks are weird and wonderful animals, which they’re looking forward to learning more about as they study this one. Alright. Next up!

MAMA: OK, this one is about an adult drink.

MAMA: Yes, but it’s also elephant poo – so how could I resist?

LEELA: Oh, stinky! But probably pretty funny, by the sounds of it – or should I say, the smell of it.  OK give us the low down then.

MAMA: Welcome a certain kind of alcoholic beverage called gin is famous for being made with botanicals – in other words lots of interesting tasting herbs, fruits and flowers to add flavor. Well,  a South African couple have a hack.  Instead of foraging for these botanicals themselves they’ve decided to use a shortcut by using elephant dung instead.

LEELA: Yes, I’m aware of what dung is.  What’s giving me cause for concern is that someone would make a drink with it!

MAMA: 1500 bottles of specialty gin a month to be precise.

MAMA: No, pooo. You see, apparently elephants are very selective eaters, but don’t digest a lot, in other words, food doesn’t stay in their gut long. So they’re perfect helpers – choosing the best fruits and flowers and plants.  And, you know, turning it into a neat little package.
LEELA: Yick.  I’m glad kid drinks don’t have these “artisnal shortcuts” – I’ll leave the poo-aholl to you crazy adults.

LEELA: A brazillian pop star wants everyone to know – it’s ok to fart!

LEELA: Yep, the singer known as Pocah was rushed to hospital because of trapped flatulence – flatulence is the ncie way to say fart, in case you didn’t know. And since flatulence is the body’s natural way of releasing nasty toxins, it’s, well, unhealthy not to let ‘em go.

LEELA: Take it from Pocah. She should know. She was so shy about farting in front of her boyfriend that the farts built up into severe stomach pains that put her in hospital! Now she’s a farting evangelist, you know, someone who spreads the word – telling everyone she knows to let it rip.

MAMA: And finally, as if a pig in a drone, teen sharks that are 100-year-old, poo-infused-gin and farting evangelists were not odd enough – get a load of this. What does a Filipino hair salon owner, who works on cruise ship 8 months of the year, do when he has artistic urges?

MAMA: Yeah, it can be really boring being at sea. So when Jesstoni Garcia trims his hair jet black hair he doesn’t brush the clippings into the trash. Oh, no. Using a thin brush and some sticky goo, called resin, he carefully sprinkles his hair clippings on a white canvas and spends hours arranging them into… portraits. Of celebrities.

LEELA: OK… Well, I’m all for upcycling, so way to go Jesstoni! I guess you could say, hair today… art tomorrow.

LEELA: And that brings us to the end of this special foolish quick dip episode of Newsy Pooloozi!

MAMA: So – did you like our selection of weird and wacky world news stories? Any idea which four were real news and which was the April Fooled ya piece of news? Well, why don’t you drop us a line and tell us what you think?

First three answers will get some Newsy Pooloozi merch – how abouta that?!

MAMA: But before we go – speaking of quirky things… Kids Listen, the children’s podcast network (of which Newsy Pooloozi is a part of) are mashing things up for all you looking to expand your listening playlist, especially over long summer road trips, get a load of this.

LEELA: Alrighty then – thanks for taking this quirky quick dip with us – we’ll see you next week for a full swim in the Newsy Pooloozi!