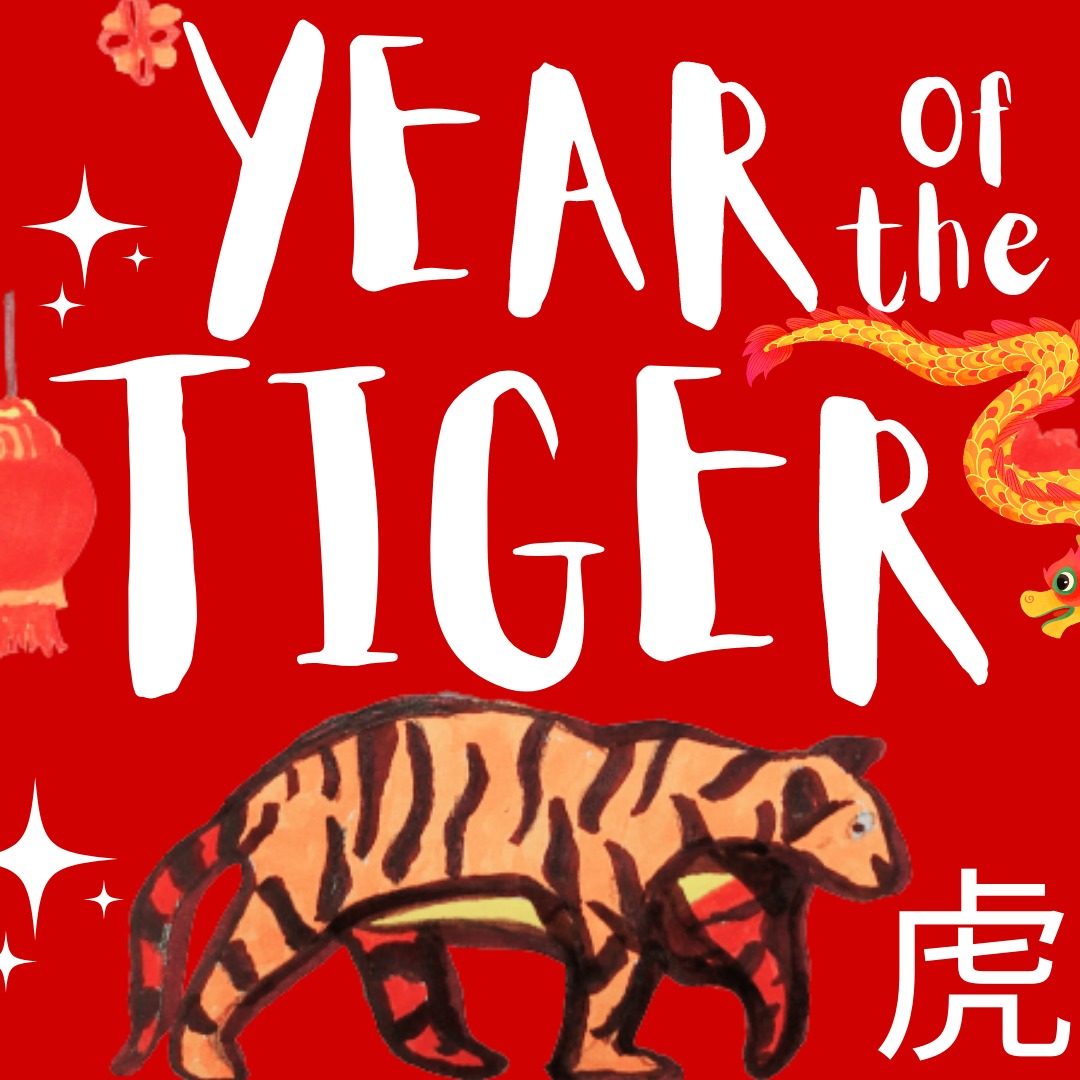 EPISODE 83 – YEAR OF THE TIGER

LEELA: Hello and welcome to Newsy Pooloozi – a pool of news and information!

Or, as the New York times likes to call us, a news variety show!

I’m your host Leela Sivasankar Prickitt and, as ever, I’m joined by my Mama – who’s also the big story explainer and the producer of this podcast.

LEELA: OK – it’s technically on Tuesday, February 1st, but we want to make sure you’re all prepared for the Year of the Tiger. Grrrrraaawww!

Also, grrrrreat news on the ocean front – a new coral reef has been discovered, deep at sea off the coast of Tahiti.

And find out how a group of neighborhood kids peddled their way to school on a special “bus”… sort of!

And finally, we hear about the funniest false alarms animal rescuers in England went on last year.

LEELA: But first, it’s time for…

MAMA: So by now most of us have stopped saying, “happy new year,” to people, right? Well, over one and a half billion people – that’s almost a fifth of humanity – are gearing up to say it.

LEELA: Yes, we’re talking about the Chinse new year – which is based on the ancient lunar calendar, so takes place on the first new moon of the lunar year, sometime between the end of January and end of February.

MAMA: If you want to know more about the lunar calendar and the different names and traditions of this holiday – then do check out last year’s episode on the Year of the Ox.

LEELA: That would be episode 34. But now let’s say goodbye Ox and hello tiger. Grrrrr. It’s gonna be a grrrrrrrrreat year!

MAMA: People born in the Year of the Tiger are, not surprisingly, said to be brave.

LEELA: But why exactly do the Chinese use animals to represent a new year year?

MAMA: It’s actually based on an old Chinese tale about a god called the Jade Emperor, who wanted 12 animals to be his guards. Well, that spurred what became known as the Great Race because the earlier one went through the Heavenly Gate, the better ranking they would have as heavenly guards. And can you guess who came first?

MAMA: No. The rat, actually.

LEELA: You’re the year of the rat.

MAMA: And don’t you forget it! The story goes that the rat actually jumped on the back of an Ox to cross a gushing river.

MAMA: And don’t you forget it! So the ox was second and, yes, the tiger was third. Just beating out the super fast and smart rabbit. Then came the grand dragon and the sly snake, the kind horse and goat, the monkey and last were the rooster, dog and pig.

MAMA: And the Chinese call them the Zodiac Animals because zodiac is a part of the sky, containing 12 constellations of stars, said to be an imaginary belt of the heavens.

LEELA: Well, there you have it!

MAMA: Indeed. Now let’s head to Taiwan, where our trusty correspondent Yuching Liu is standing by to tell us how she celebrates the festival.

LEELA: Hey, Yuching! Last year you were in India – but now you’re back home in Taipei – that must be a lot more fun place to celebrate the Chinese New Year!

YUCHING: Thanks, Leela. You’re totally right. I loved my time in India – but, boy, it’s great to be home for a Chinese festival!

Unfortunately, the pandemic still means we won’t be travelling as much as we normally would.

But, we believe it’s super important to meet family, so we’ll make it happen!

So first, we’ll stick spring festival couplets besides our main door, worship our ancestors, then have a delicious reunion dinner at home on New Year’s Eve.

After that, the children wish their parents and grandparents a “great new year.”

In return we’re usually given a big, red envelope with money inside.

I have to admit – that’s one of my favorite parts – since I’ll have at least 4 red envelopes!

We then chat and play fun games till past midnight. In Chinese culture, staying up late during New Year’s Eve means our elder’s life will be longer and merrier. We’ll also set off the fire crackers after midnight.

On New Year’s day we’ll wake up early, wear new clothes and go visiting our families who live nearby as well.

So, it is like a big “good-wishes-for-money” exchange, ha!

Later, on the 15th day of the month, we celebrate the “Lantern Festival.”

We usually buy or make paper lanterns, release them in the air, guess lantern riddles, and set off more fireworks. When the Lantern Festival finishes, that’s the end of the New Year celebrations.

I’m Yuching Liu reporting in Taiwan for Newsy Pooloozi! LEELA: Why thank you very much, Yuching. Sounds like a fun – and profitable – festival, ha ha!

LEELA: Now it’s time for us to dive into some good news about the environment.

MAMA: Yes, finally some good news for those underwater ecosystems composed of skeletons of marine invertebrates otherwise known as…

MAMA: That’s right. And as we know the massive underwater structures – some which are big as cities and even states – are among one of the world’s most threatened ecosystems.

LEELA: Which is bad news for the millions of sea creatures that use the reefs as a home – providing them not only lots of food, but protection from predators.

LEELA: Our sunscreen folks. And plastic. And chemicals. Yiiick!

MAMA: And a tiny rise in the temperature of the sea is also hurting the health of a reef.

LEELA: But enough of the grim bit – there’s good news at last!

MAMA: Yes, a big coral reef has been found off the coast of Tahiti – that’s the largest island in the archipelago of French Polynesia in the Pacific Ocean. And an archipelago is…

LEELA: A group of islands.

MAMA: Right, well, nearly a hundred feet, or 30 metres below the surface, marine explorers found a, and I am quoting here, a “magical” discovery.

A reef system that extends for two miles.

LEELA: The largest ever discovered at that depth. Coral reefs are usually close to the surface, you see.

MAMA: So this discovery is offering hope that if reefs can survive at this depth that they may be better protected from global warming.

LEELA: Yeah, it’s early evidence that a lot of threatened marine life will go deeper to save itself. Phew!

WORLD WRAP STING – LEELA: “What’s that? I’ll tell you what. That’s the halftime bell! Which means… it’s time to hear what’s making news around the rest of the world. Hold on tight, it’s around the world in 80 seconds.”

The US is considering sanctions on Russia as well as personal sanctions on its leader Vladimir Putin if Russia invades its neighboring country, Ukraine. US President Biden said there would be “enormous consequences” for the world if Russia made a move on the nation.

Teenage pilot Zara Rutherford becomes the youngest woman to fly solo around the world. The British-Belgium 19-year-old began flew for 5-months with stops at nearly 50 countries.

Did you hear the tropical island of Jamaica will be sending a 4-man team to bobsled at Olympics? The tiny island nation has qualified a team in the wintery event for the first time in nearly 25 years.

And it’s official – what is the most viewed YouTube video EVER? Well, it goes something like this… Baby shark, doo doo doo… It’s now gone past 10 billion streams, which is a number greater than the entire human population. And good luck getting that out of your head.

MAMA: Calls? As in phone calls?

LEELA: Yep – false alarms to be precise. To the UK’s animal rescuers at the Royal Society for the Prevention of Animals, otherwise known as the RSPCA.

MAMA: Oh – you mean when people think an animal is in distress but, well, isn’t?

LEELA: That’s the one – they receive a call to help injured animals every 30 seconds in the UK. Last year the organisation went on 280,000 call outs. Only sometimes… there it’s a mistake.

LEELA: Like when a resident in West Yorkshire panicked when they spotted a snake on their roof. Only… it wasn’t.

LEELA: Nope – not according to our England correspondent Jackson Hosking.

JACKSON: That’s right. It was night time and difficult to see in the dark, so the fire and rescue service used a long hook to pull the snake down… and very quickly realised there was nothing to worry about… because it was a headless rubber toy!

JACKSON: Yeah, the RSPCA reckons a bird of prey had made the same mistake: swooped down, grabbed it, before dropping it on the roof when it realised it wasn’t a tasty treat!

LEELA: And then there was a call to rescue a dog tied to the front of a boat.

LEELA: Only it wasn’t.

JACKSON: False alarm. The ‘dog’ in question… was a stuffed toy tiger that had been tied onto the bow of the boat.

LEELA: And when it snowed heavily last winter the RSCPA received lots of calls about animals out in the tough conditions. Like a poor duck frozen in a pond!

JACKSON: Nope – it was a plastic ornament. Of a duck. Covered in snow.

LEELA: Are you quackers?

LEELA: Oh sure. Like the woman in London who spotted a bird in distress, tangled in a flag pole on the roof of an apartment building.

JACKSON: It was not. In fact it was one of those a plastic bird scarers – you know like a scarecrow, but of a bird, meant to scare away other birds. No distress, except for maybe the pigeons who fell for it. Then again, they might have known better…

LEELA: True. Thanks for setting us straight, Jackson. But, as you say, Mama, it’s nice to know people are so concerned for the welfare of animals – even the fake ones.

MAMA: FAB FACT NUMBER 1 – Happy Chinese New Year – get ready for the grrrreat  Year of the Tiger. 12 Zodiac Animals represent each new Chinese year based on an old folktale about what?

LEELA: FAB FACT NUMBER 2 – So what does zodiac mean?

It’s a part of the sky, containing 12 constellations of stars, said to be an imaginary belt of the heavens.

It means your elder’s life will be longer and merrier.

LEELA: FAB FACT NUMBER 4 – An undiscovered coral reef was discovered off the coast of Tahiti – that’s the largest island in the archipelago of French Polynesia. What’s an archipelago?

A group of islands

MAMA: FAB FACT NUMBER 5 – And what exactly is a coral reef?

An underwater ecosystem composed of the skeletons of marine invertebrates.

LEELA: And almost brings us to the end of this episode of Newsy Pooloozi!

But first – a shout-out to CandyLover on iTunes who left us the sweetest review – and five stars – thank you, thank you!

LEELA: “I love this podcast sooo much and I listen to it every night and it is my favorite podcast ever!!!!!”

MAMA: With load of exclamation marks, thumbs ups, smilies and heart smily emojis. OMG – awesome review, thank you So much CandyLover. And I’m totally with you on the candy love front.

LEELA: Oh, yeah. And what about the rest of you??? Come on – write in a review and we’ll read it out loud too.

LEELA: Oh, yeah. Alrighty then. That’s it from us. We’ll catch ya next week in the happy, splashy giant Newsy Pooloozi!