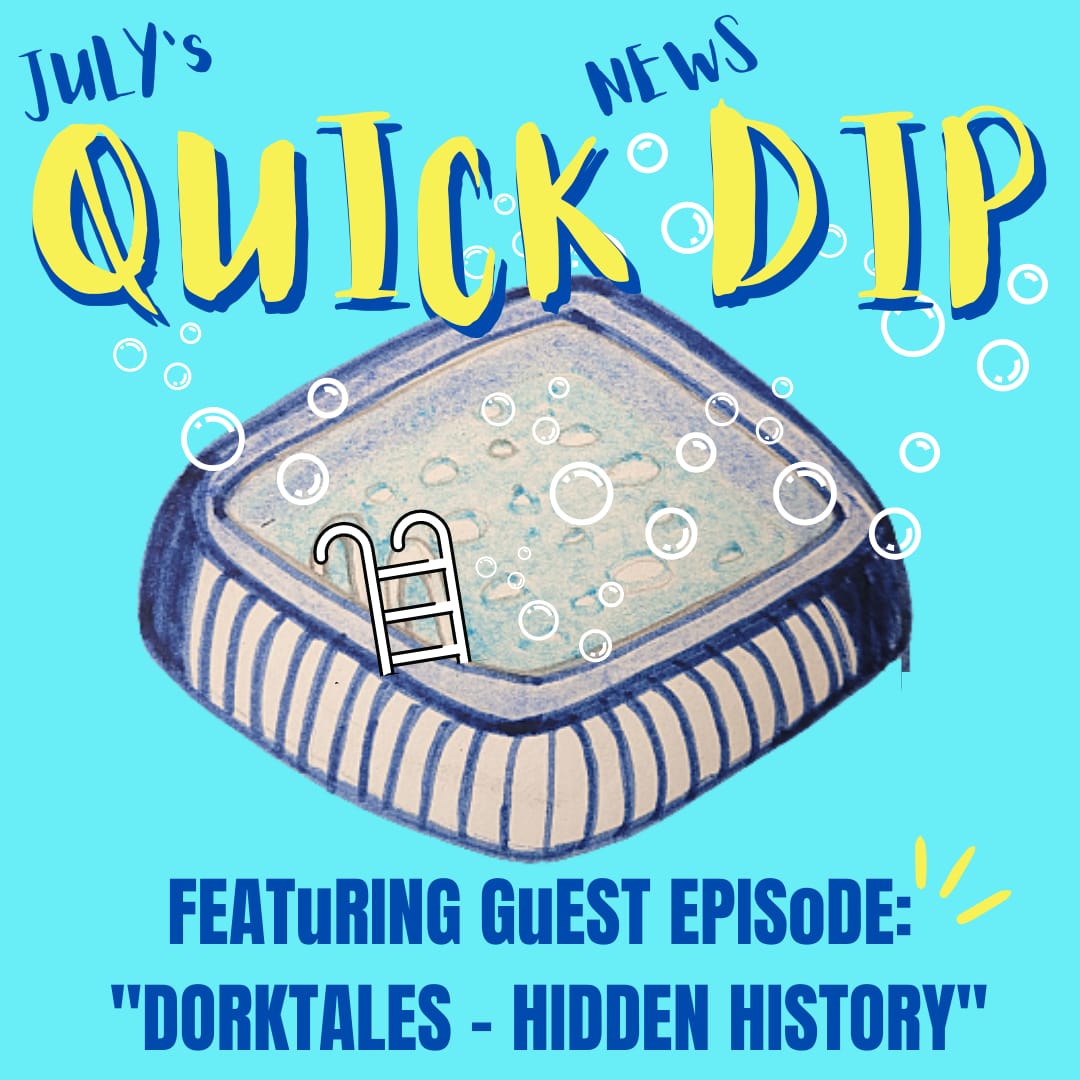 Hear our “quick dip” of world news, as we slim down for summer, followed by a guest episode from The Dorktales Storytime (Hidden History) podcast!

LEELA: Hello and happy summer. Welcome to Newsy Pooloozi – a whirlpool of news and information!

I’m your host, Leela Sivasankar Prickitt and, as ever, I’m joined by my sidekick, and sound effects finder, otherwise known as my Mama.

LEELA: As promised, after our birthday bash –

LEELA: (We’re one year old now, in case you didn’t know!!!), we’re starting and ending each episode with a little –

LEELA: back-present! First, a taste of a podcast we think you might like to add to your playlist! Have a listen to this:

LEELA: Go on, add it to your playlist!

MAMA: But that’s not all.

MAMA: We’ll also be ending our July episodes with a guest episode from some of our favorite podcasts at the Kids Listen club, which we’re a part of.

LEELA: That’s right. Since it’s July and many listeners in the northern hemisphere are in summer or monsoon mode – spending as much time playing outside as possible –

LEELA: Ok, ok! (Laughs) But since the news doesn’t stop –

LEELA: We’re back inside, but giving you a “Quick Dip” into the whirlpool of news and information.

MAMA: Yep, for the next three weeks, we’ll give you a shorter take on the news of the week, with our “Quick Dip” episodes. But we won’t leave you without your entertainment.

LEELA: You gotta have something to listen to on those summer road trips.

MAMA: Exactly. So – let’s shift into the “slim summer” gear.

MAMA: Yes, leading this week’s news is the space race.

LEELA: Ba-ba-da-daaaah! And the winner is:

MAMA: UK billionaire businessman Richard Branson has successfully reached the edge of space, on board his own rocket, ahead of US Amazon billionaire Jezz Bezos never mind Elon Musk.

LEELA: Branson – the owner of Virgin Air, Virgin Train and Virgin Records – flew high above New Mexico in the US,  in his Virgin Galactic rocket plane, which his company has been developing for the past 17 years.

MAMA: This makes him the first of the new space tourism pioneers to try out their own vehicles.

LEELA: Jeff Bezos reckons his rocket will go higher in the coming weeks.

MAMA: But not likely as long as Branson’s who was up in space for an hour. And he was high enough to escape Earth’s gravitational pull, so he and the five other crew members could float around weightless.

LEELA: But he still had time for a little message from the edge of space.

“To all you kids down there and the next generation of dreamers – if we can do this, imagine what you can do!”

MAMA: Now that he’s been granted a license to fly commercial spaceflights, some 600 people hope to take 90km trip up.

LEELA: In Sports news, Italy is still celebrating and England is still in the dumps over losing Sunday’s European soccer championship.

MAMA: Honestly, I couldn’t watch the end when it went into penalty kicks.

LEELA: Yep, despite England getting a goal in the first two minutes of the match, Italy got theirs in the second half and then no one could get in another goal, even in overtime. So a penalty shoot-out was the deciding factor, Italy winning 3-2.

MAMA: The sad thing is the nasty online abuse some English fans have thrown towards the three young English players who weren’t able to convert their penalty kicks into goals.

MAMA: Yep. But speaking of football –

MAMA: Right, OK. It wasn’t just the big European countries that were battling it out. On Saturday Argentina defeated Brazil 1-0 to win the Copa America.

MAMA: The Copa America is a soccer tournament for the countries of South America. Argentina scored after 22 minutes. And while Brazil fought hard, especially in the second half, they weren’t able to come back.

LEELA: Well, there ya go.

MAMA: Stop releasing your poor, unloved goldfish into the wild.

LEELA: And not just cos it’s a mean thing to do to your pet.

MAMA: But because goldfish can five times bigger in the wild and cause major disruption to the existing ecosystems. As authorities in the US state of Minnesota know well after finding huge goldfish in their lake. These goldfish can badly effect the water quality of non-native lakes, by disturbing the sediment at the bottom of the lake and uprooting plants.

LEELA: So – hold on to your goldies, guys! I mean, let’s face it, they don’t take that much care.

MAMA: And they don’t exactly live long either. Be patient.

MAMA: Leela, how do you spell “polymath?”

MAMA: You know, polymath – a person who knows a lot, well, has “wide-ranging knowledge.” Like

LEELA: Whewww! AND she knows how to spell better than any other kid in America?

MAMA: Forget kids – she probably spells better than most adults.

LEELA: And for our last story in the news this week – how much would you pay for a video game?

MAMA: An old one at that.

LEELA: And, get this, one you’ll probably never even play!

MAMA: I know. A 25-year-old copy of Nintendo’s “Super Mario 64″ has sold for more than $1.5 million, smashing the record for the most expensive sale of a video game at auction.

MAMA: Oh no, even crazier is: it comes only two days after another old Nintendo game, “The Legend of Zelda,” was sold for $870-thousand.

LEELA: And whoever bought it is unlikely to even play it, right?! Cray-cray.

MAMA: Well, some people enjoy buying and collecting the things they love just because they love them.

LEELA: Hmmm. Takes all kinds, I guess. But I do wonder, what I could do with 1-and-a-half-million dollars…

LEELA: And that brings us to the end of this “quick dip” part of Newsy Pooloozi.

MAMA: But we’re not leaving you high and dry.

MAMA: Here’s a guest episode from the fabulous Dorktales Storytime Podcast, which is a slightly wacky and very geeky retellings of classic fairy tales and true stories about the hidden heroes of history!

And since we’re a “factual podcast” – being a news show and all that – we’re going to play a Dorktales Hidden History about Mary Golda Ross.

LEELA: Bet ya didn’t know she was the first known Native American female engineer, did ya? Well, listen up!

MAMA: That was Jonathon Cormur, host of the Dorktales Storytime Podcast, our special podcast episode this week on our slim summer July edition.

LEELA: That’s right. The next two weeks we’ll be giving you a “Quick Dip” of news, followed by a fab guest podcasts, so you won’t go away thirsty.

Alrighty then – see you next week in the Newsy Pooloozi!