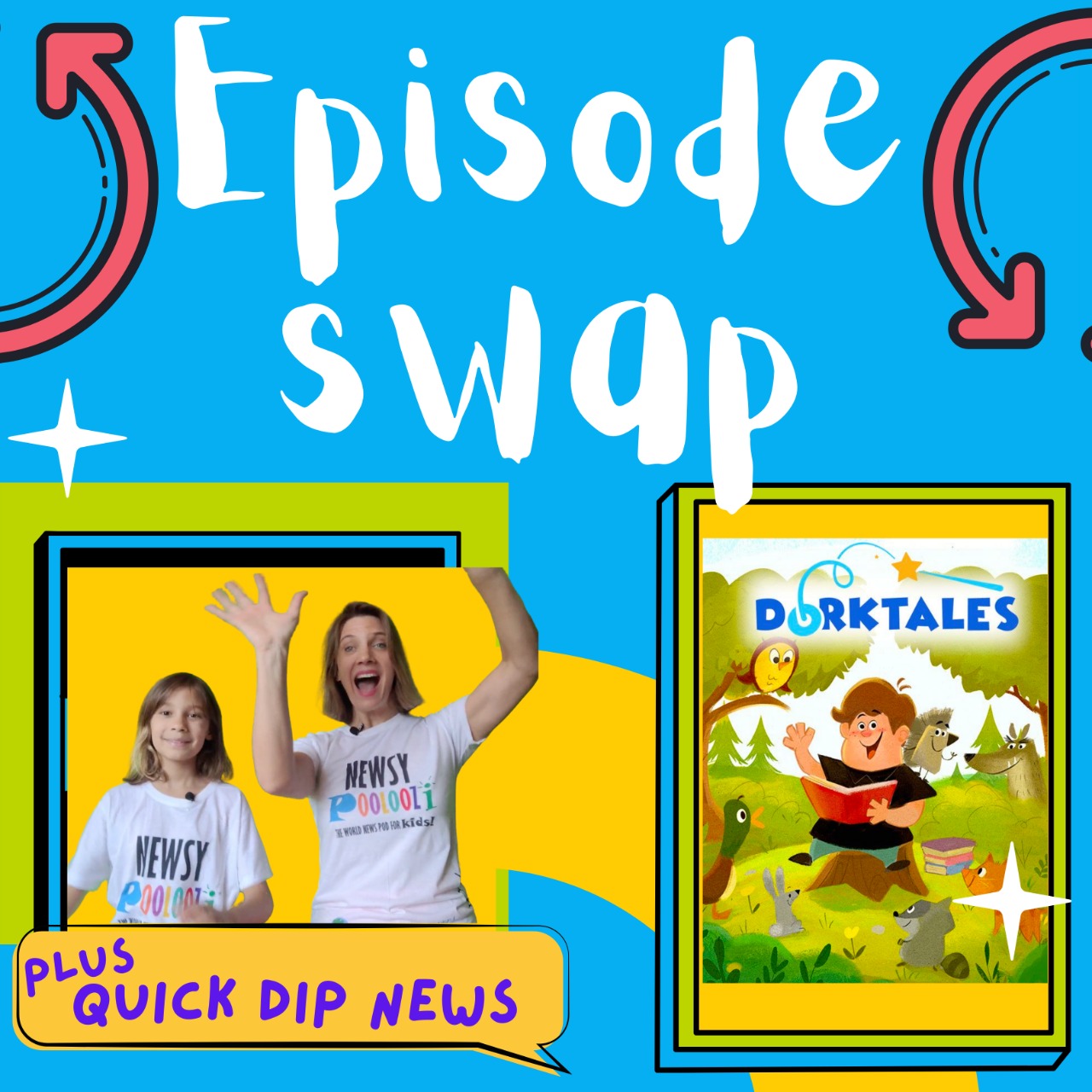 LEELA: We’re taking you to the stars this week with space news, questions about Google’s artificial intelligence, Australia’s creepy crawly solution to plastic, Ireland’s “flying” boat and a sweet rescue from a chocolate factory.

MAMA: Welcome to our summer special Quick Dips into the Newsy Pooloozi – followed by a fabulous episode swap with some of our dorkiest podcasting friends this week.

LEELA: That would be the fabulous Dorktales Storytime Podcast and Hidden Histories. But first, let’s dive into this week’s news with the…

MAMA: The head of NASA has confirmed the space agency will be officially investigating if aliens have already visited earth.

LEELA: And when Bill Nelson says aliens, he means organic or… ROBOTIC!

MAMA: Yes, they’re going to try and figure out what that tic-tac looking Unidentified Aerial Phenomenon were that Navy pilots saw on their radar back in 2004.

LEELA: Speaking of robots… A new type of artificial skin – developed at the University of Glasgow – could give robots “near-human levels” of sensitivity to touch. Creepy!

MAMA: Speaking of creepy… Did you hear that Google has sent home an employee for saying that the company’s artificial intelligence chatbot – you know, the computer program designed to simulate conversation with humans, like at a bank or airline online – was actually “sentient?”

LEELA: Sentient is a fancy way of saying the AI is able to perceive or understand things. Like a HUMAN! OMG!

MAMA: OMG! I’m trying to be robot… Moving on to our second story…

LEELA: We all know plastic pollution is a BIG problem. And we’ve discussed many solutions on Newsy Pooloozi before. But never one as creepy-crawly as this…

MAMA: Researchers in Australia have discovered a beetle that can eat a type of plastic called polystyrene!

LEELA: That’s one of the most common forms of plastic – like for making Styrofoam.

MAMA: And it’s not easy to recycle. Getting into our water streams and possibly even into our body.

LEELA: Enter the larvae of a certain species of beetle – usually called a super worm.

MAMA: Which can eat through polystyrene thanks to some special stuff in their gut called enzymes.

LEELA: We’re happy to say that the researchers are trying to replicate, or copy, this enzyme in a lab

MAMA: And then use THAT to gobble up the world’s excess plastic and NOT an army of super worms.

LEELA: Thank goodness for that!

LEELA: Have you seen the flying boat launched in Northern Ireland? Epic!

MAMA: But when Leela says flying she means it looks like it’s flying.

LEELA: But the reality is just as cool, trust me. Because this vessel has special HYDRO-FOIL wings – which are wing-like blades! – attached to the bottom of the boat.

MAMA: They rev up, push the boat up and out of the water, picking up speed, and pretty much looking like it’s flying.

LEELA: And did we mention this 10-tonne vessel that can carry 12 people is also eco-friendly electric powered.

MAMA: No nasty diesel in the water with this boat.

LEELA: Now getting trapped somewhere is no fun at the best of times. But imagine if you were trapped in a vat of chocolate? Deelish – or what?

MAMA: Firefighters had a strange call from the Mars M&M candy factory in the US state of Pennsylvania a few days ago.

MAMA: I’m not sure how yumm it was, the rescuers had to cut a whole out of the bottom to release them from the sugary sludge.

MAMA: It’s unclear how they fell in or if they were injured, though they were taken to hospital for evaluation.

LEELA: Talk about a sticky situation…!

LEELA: Alrighty then we’ll be back next week with more wacky world news. But now…

MAMA: It’s time for a hidden history from the Dorktales Storytime Podcast. You might want to get your swimsuit on for this one.

LEELA: Or stay out of the water entirely,

MAMA: Yeah, come to think about it…