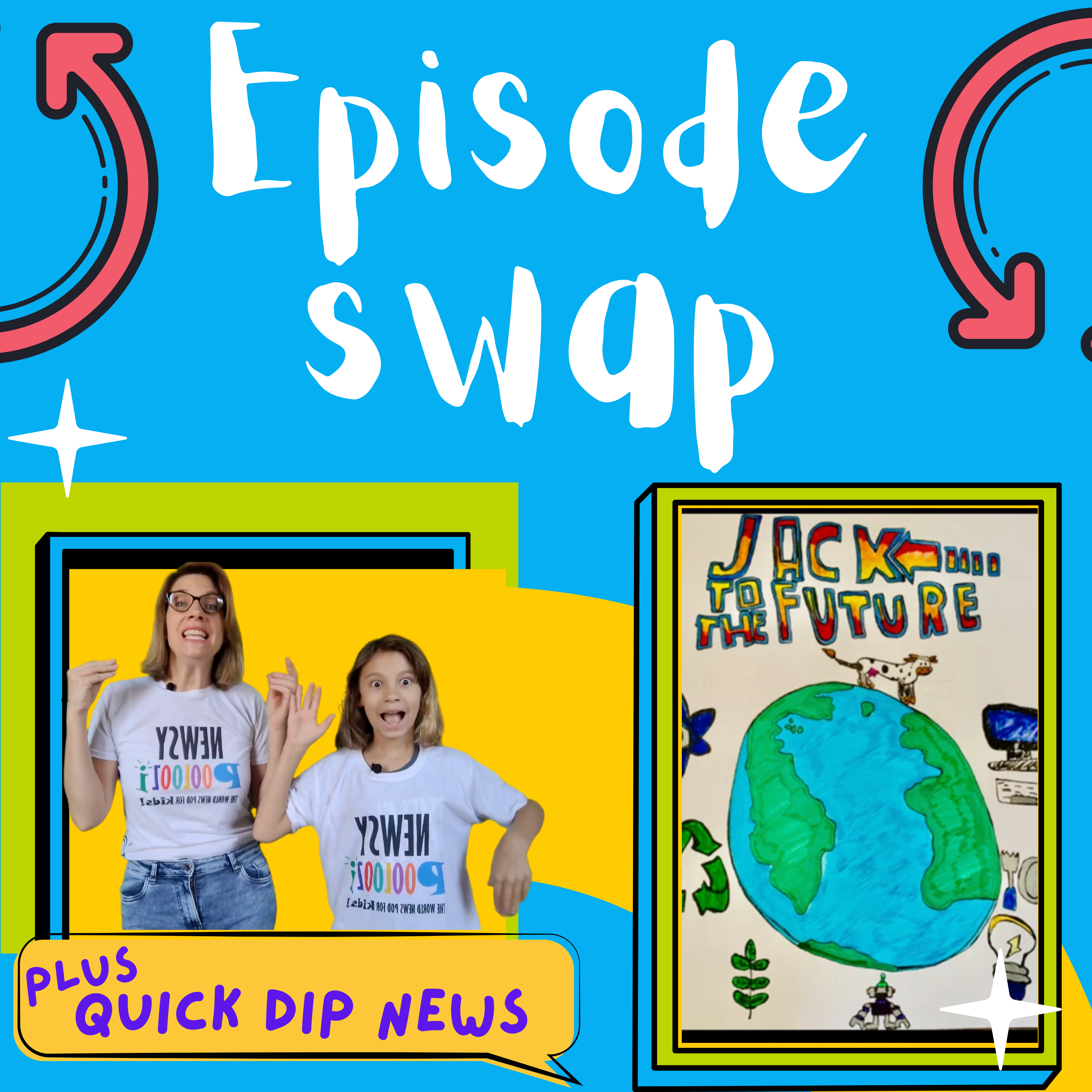 This week’s Quick Dip of world news begins with scorching heatwaves in the US and wildfires in Europe — parts of Spain, Germany, France, Portugal, and Italy. Did you know that in the US, 70% of Americans will feel the 90-degree heat (Fahrenheit), which is more than 32 degrees Celsius?

In other news, we’ll explore UK’s DNA mapping project, where scientists want to map the DNA of every single life form in the UK and Ireland.

Also featured in this week’s news are Italy’s giant batteries, K-pop stars BTS disbanding, and the garlic-for-homes scheme in China.

And finally, this week we’re swapping episodes with the Jack to the Future podcast.

LEELA: From scorching weather in the US to forest fires in Europe.

Massive DNA mapping in the UK…

And you won’t believe what you can use instead of cash to buy a home in China. This excludes all vampires! It’s a packed week on newsy pooloozi

LEELA: Hello, hello – I’m Leela. And as ever I’m joined by my sidekick otherwise known as my Mama.

LEELA: And this is our summer “quick dip episode” of Newsy Pooloozi – the coolest news pool for curious kids and adults.

MAMA: Yes, we are taking a little bit of a breather over summer. But we know the news doesn’t stop – so…

LEELA: Let’s take a quick dip in the news with…

LEELA: Eight northern and central states are under HEAT ALERTS. How hot is hot, you ask?

LEELA: And that’s the same temperature over in parts of Europe too. Not just Spain, which is no stranger to the heat, but even parts of Germany and France.

MAMA: Sadly, it’s also leading to bad wildfires in those countries and Portugal and Italy too with firefighters working around the clock to try and contain them.

LEELA: In the UK a massive DNA mapping project is about to begin.

MAMA: Scientists want to map the DNA of every single life form in the UK and Ireland.

LEELA: And we’re talking EVERYTHING from the cute to the ugly, big and small animals, plants and let’s not forget fungi.

MAMA: We can’t forget the fungi, 70,000 species in the UK and Ireland in fact – it’s one of biology’s most ambitious projects.

LEELA: And it won’t just help scientists discover more about the natural world – and how to help it survive climate change.

MAMA: But it could even help them find nature-inspired medicines that could help the US better survive too.

LEELA: An Italian start-up has successfully launched a battery that uses carbon dioxide to store renewable energy on a major scale.

MAMA: And when she says major scale, she means for a utility grid. Remember, one of the challenges with new forms of cleaner energy is how to store it.

LEELA: Having a bunch of small batteries with lots of precious metals is not exactly efficient. So, this news is a BIG deal.

MAMA: Called Energy Dome, it’s moved from the concept stage as in just the idea to full testing of a multi-megawatt plant in Sardinia, Italy, in just over two years.

LEELA: In case you happened to be under a tree last week and missed this mega pop news…

MAMA: Fans of K-pop are still talking about superstars BTS announcing they’ll be focusing on their solo careers.

LEELA: OMG! But… they were clear to say

MAMA: And I quote, “It’s not that we’re disbanding! We’re just living apart for a while.”

LEELA: Not only are fans distraught, but the talent agency that supports the group is losing money.

MAMA: Yep, shares in the group’s agency lost as much as $1.7 billion dollars in market value.

LEELA: Well, if you’re a farmer in Central China and you don’t have enough cash to buy a house… you’ll never guess what you can use instead.

LEELA: Close – wheat and garlic, would you believe?

LEELA: Yes, a desperate property developer is coming up with new ways to attract buyers – offering to swap wheat and garlic as down-payments on a house.

MAMA: Okay well, I see. So basically, the real estate in China isn’t as good as it once was when there was a massive surge in building new buildings and now there are more new homes than there are buyers who can afford them.

LEELA: Exactly. So, why not use your crops as cash? Makes sense to me.

MAMA: I guess it’s the way the world worked for centuries, Millennia even I suppose.

LEELA: Only – bad luck for the vampires…! I want to suck your blood… Garlic house

LEELA: Alrighty then folks – that’s it from us.

MAMA: We hope you enjoyed this week’s quick dip in the wacky world of news. And since we know you’re all settled in and comfortable, we’re going to now treat you to one of our podcasting friends, another child podcaster in fact.

LEELA: Yes, that would be Jack from Jack to the Future, of course.

MAMA: Who’s got a fab episode about the future of computers.

LEELA: Take it away, Jack.

JACK TO THE FUTURE PODCAST (Not transcribed)