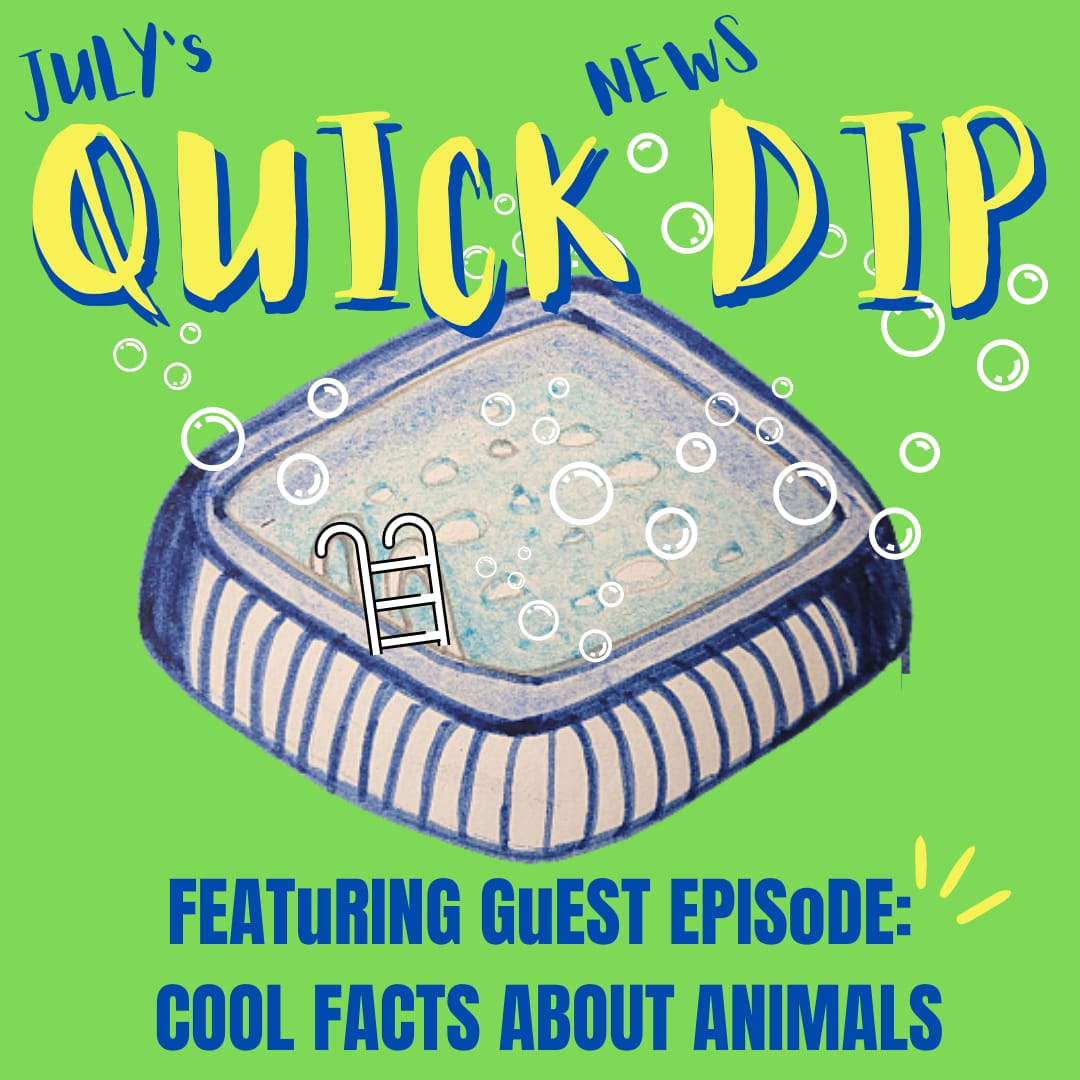 We slim down for summer this July with our “quick dip” of world news, followed by a guest episode from the Cool Facts About Animals podcast (Mega Plastic episode)!

LEELA: Hello and welcome to Newsy Pooloozi – your weekly news podcast! I’m your host, Leela Sivasankar Prickitt and joining me is my Mama, otherwise known as my podcast sidekick.

LEELA: And we have a confession to make.

LEELA: As Newsy Pooloozi listeners will know, we usually report from our high-tech studio –

MAMA: Under the bed because it has the best sound.

LEELA: In New Delhi, India. But…

MAMA: We’ve managed to get to America to see family for the first time in two years.

LEELA: Yes! Though, we’re missing the monsoon in India, we’ll be back. And, just so you know, we’re in our high-tech studio… in my grandparents’ closet.

MAMA: Quietest place in the house.

LEELA: But the news doesn’t stop, so even though we’re taking a break (and probably you are too, come to think of it!), we’re bringing you our special “slim summer quick dips.”

MAMA:  But we won’t leave you high and dry after that.

LEELA: Go on, add it to your playlist!

LEELA: Come on, let’s have a quick dip of news.

LEELA: And the youngest person ever –

MAMA: to go up into outer space went with Amazon billionaire Jeff Bezos.

LEELA: The youngest astronaut was 18-year-old Oliver Daemen from the Netherlands, who got the seat after his dad won an auction to bid for the seats and gave the ticket to him. Lucky guy.

MAMA: The oldest member of the four-person crew was 82-year-old Mary “Wally” Funk, who – when she was just 20 years old – was the first female flight instructor at a US military base. She was also part of the Mercury 13, a group of women who underwent the same screening tests as male astronauts, but never got to fly into space.

LEELA: Until now. Thanks, Jeff. The rocketship was called the New Shepherd (not very space-age sounding if you ask me), which has the biggest windows-ever flown in space, giving the crew stunning views of Earth (OK – that’s pretty cool). I’m so jealous. Even if they were only up there for 10 minutes and ten seconds.

LEELA: Yeah, around 70 massive wildfires are burning in the western United States as hot and dry conditions are making them spread FAST.

MAMA: The largest fire (nearly 500 square miles) is currently in the state of Oregon, just above California. It’s destroyed nearly 200 buildings and forced 2,000 people to evacuate the area. Fire fighters, who are working day and night to control it, say the fire is the size and strength of blazes normally seen later in the summer.

LEELA: Meanwhile in Europe – Germany, Belgium, and the Netherlands – are struggling to recover after massive floods last week.

MAMA: Even France and Switzerland had floods. Intense rain in Europe led to many rivers overflowing with water pouring through cities and towns, destroying small buildings, piling up cars, flooding homes and killing  at least 150 people.

LEELA: And that’s not all for our weird weather news. South England is in the 80s (almost 30 degrees Celsius!).  And while that might not sound hot to you in India or America, trust me, it’s unusually hot. Most British homes don’t have ACs or even ceiling fans, because they normally don’t need them!

MAMA: In fact, Northern Ireland recorded its highest temperature on record. And the Met Office —the national weather service for the UK — issued its first-ever extreme heat warning.

LEELA: And while it might mean the beaches and lakes are full of summer fun, that kind of heat can be dangerous if you’re not used to it. So don’t forget to slather on the sunscreen and drink lots of water, folks!

MAMA: And now, we all know methane gas is produced by humans and animals burping and farting.

SFX OF BURPING AND FARTING

MAMA: Yes… But they can also be caused by tiny microbes, which you know are single celled organisms.

MAMA: But what about on Mars???

MAMA: Oh, yeah. Nasa’s Curiosity rover has been recording methane releases on the Red Planet since 2012. But until now, scientists couldn’t work out where the gas was coming from.

LEELA: Wait? Are there aliens living and burping on Mars?

MAMA: Well, maybe not Martians as we imagine them, but scientists from the California Institute of Technology think they’ve found where they’re coming from, if not what: in the planet’s north-western crater floor – just 12 miles from where the old rover is.

LEELA: Well, that’s a happy coincidence. But no sign of burping aliens, huh?

MAMA: Well, methane gas does usually comes from living things. But they don’t know what it is just yet.

LEELA: And, finally, if you thought that was odd, get this: oysters are invading the Olympics!

MAMA: Yes, the unexpected guests are threatening several water-based events and leaving staff on high alert. This comes as another blow to the Tokyo Olympic Games, which also faces rising COVID-19 infections and its top sponsor has just pulled out.

LEELA: The oyster invasion is impacting the Sea Forest Waterway in Tokyo Bay, where the canoeing and rowing events are supposed to happen.

MAMA: So officials had put floats in place to prevent waves from interfering with athletes, right. But last year the floats  started to sink. Why? Oysters began attaching themselves to the floats – first a few, then a few more and a few more…

LEELA: And more and more. Like 14 tons of the crusty suckers! And it’s gonna cost over a million dollars to remove them!

MAMA: But on the bright side, lots of people consider eating oysters a delicacy – in other words a rare and fancy treat.

LEELA: Mama, did you know research has shown that oysters have developed an advanced method of communication?

LEELA: Yeah. They use “shell” phones.

LEELA: And that brings us to the end of this “quick dip” part of Newsy Pooloozi.

MAMA: But that’s not all we have for you this week.

MAMA: Here’s a guest episode from another family of kid podcasters – Cool Facts About Animals – though this episode is a departure from their usual trek into the animal kingdom.

LEELA: Yes – this one is all about a subject close to our Farts. Roll the tape, Mama.

LEELA: Thanks a lot, you guys!

MAMA: Yeah. You gotta check out their website: Cool Facts About Animals podcast.com – and have a listen to learn everything about starfish and dragonflies.

LEELA: Or episodes on pink river dolphins and cute Koala bears to name a few.  Alrighty then – that’s all from us. See you next week for one more “quick dip” this month in the Newsy Pooloozi!