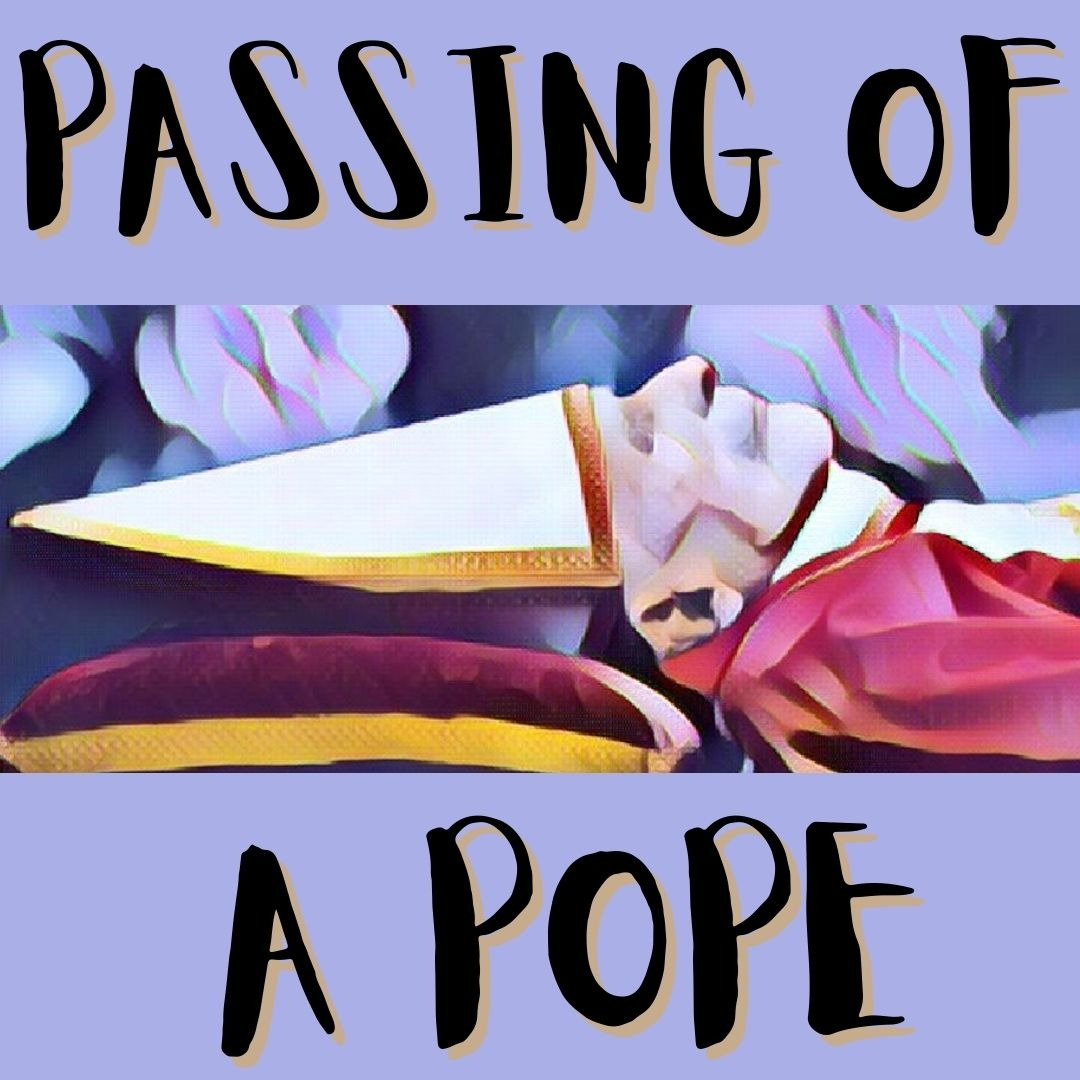 LEELA: The retired pope is laid to rest, Britain’s “cosmic girl,” an opal crater on Mars, England’s plastic ban and Argentina’s peso-art – all that and more this week!

LEELA: Hello and welcome to Newsy Pooloozi – the biggest and at times! the wackiest pool of news and information for curious kids and adults to dive into…

I’m your host, Leela Sivasankar Prickitt. And as ever, I’m joined by the big story explainer and sound effects finder otherwise known as…

LEELA: Or my mom!  This week on Newsy Pooloozi we have a special report FROM ROME on the grand funeral of a pope and what it means for the Catholic Church.

And what do you do when you live in a country where the money is becoming worthless create art, of course!

All right – let’s get started. First up is…

MAMA: So last week we mentioned that a former pope had died, and a funeral was about to take place.

LEELA: Well, it did! Fifty thousand people squeezed into St Peter’s Square for the funeral in Vatican City which, did you know, is an independent country in the middle of Rome?!

MAMA: Though it’s surrounded by Italy, it’s an independent city-state which is the headquarters of the Roman Catholic Church. Home of the Pope.

LEELA: And tons and tons of art.

MAMA: Yep, that too. And for days Catholic pilgrims have flooded in to pay their last respects to the retired Pope Benedict.

MAMA: Right. He’s very much alive. Though questions are now being asked if he might think of retiring, early, like Benedict did. But for more on this we should go to our Rome correspondent, Ananya Kazmin, who went to see the pope as he was lying-in-state ahead of his funeral.

LEELA: Well, take it away, Ananya.

Thousands of people packed into a foggy St Peter’s Square last week for the funeral of the retired Catholic leader, Pope Benedict.

And who led the ceremony?

Sounds obvious, but… no!

This was totally ground-breaking.

Usually, Popes are leaders of the Catholic church for life.

But not Benedict XVI, who died on New Year’s Eve at the age of 95.

See, he made history back in 2013, when he decided to abdicate or resign from the “Papal throne*,” as it’s called.

Why? He was getting old!

He said he lacked the energy to manage the church’s complicated affairs.

Well, his decision shocked the world’s 1.3 billion Catholics because it was the first time a pope resigned in 600 years!

Afterwards, Francis was elected to lead the church, while Benedict retired to a life of prayer.

Most Catholics are pretty used to it now.

One priest said it was like giving the church two lungs. You know, to breathe better.

But now… people are wondering whether Pope Francis, who isn’t exactly young – will follow a similar path.

So far, the 86-year-old says he’s not thought about it.

But others have and it’s a hot topic in Catholic churches around the world!

LEELA: Thanks a lot, Ananya. Fascinating stuff! I have to say I didn’t realize the pope sits on a throne. And now, moving on from Italy or I mean, Vatican City up north to Britain and then to Mars.

MAMA: Bad news for Britain as they were unable to launch a bunch of satellites into space in what would have been an historic first of its kind for the country.

LEELA: Oh, no! They must be soooo disappointed.

MAMA: Yes, the rocket was loaded with nine satellites, and was successfully launched from a customized Boeing 747 plane called “Cosmic Girl.”

MAMA: Yes, but the rocket and the satellites were lost after “a technical failure” as it approached its final orbit. Virgin Orbit, which launched the mission, says it is working “tirelessly” to investigate what caused the failure.

LEELA: But never fear, there is some positive or should I say dazzling no they did not find to sing a song on mars space news too. Get this a big crater on Mars may be teeming with as in full of opal gemstones.

MAMA: Yes, it’s said to be giving the cracked surface a semiprecious glint.

LEELA: And in case you didn’t know opals look a little like pearls, though more iridescent and aren’t always just white.

MAMA: And, importantly, opals are a “hydrated form of silica with a water content that may range from 3 to 21%.

MAMA: Yep! And these kinds of minerals and structures only form where rock and water have interacted. And – thanks to this new data from NASA’s Mars Curiosity rover – that could have been happening much more recently than was previously thought.

LEELA: And that, ladies and gents, increases the possibility that there was indeed once life on Mars. (Deee-neee-neee-neee.)

MAMA: Well, microbial life as in life the size of tiny micro-organism, but still.

MAMA: Thousands of people in Brazil are holding pro-democracy rallies in response to the storming of Brazil’s Congress last week by supporters of ex-President Jair Bolsonaro. They also ransacked the presidential palace and Supreme Court.

Communities in the north-western region of Australia are cut off, after facing the worst flooding in its history after a storm that had been a tropical cyclone brought days of heavy rain.

In the US, after an historic 15 rounds of voting, the Republicans finally chose Kevin McCarthy as their leader, meaning he’s now the Speaker of the House.

And scientists say they’ve found the world’s most intelligent dog and it’s not a Border Collie usually thought of as the smartest. The researchers from Finland found the Belgian Malinois, often used as sniffer dogs for police, to be the brightest breed.

LEELA: Thank you, mother, for that… whippity-whappity-zippity-zappity wrap of what’s making news elsewhere in the world.

MAMA: Leela… Are you feeling alright?

LEELA: I’m recovering from a nasty stomach flu, so thought I’d take that line a little easier this week.

MAMA: Ok, fair enough. You’re a trooper for doing the podcast this week.

LEELA: Thanks, Mama. And now, most of our listeners will know – you do NOT like single-use plastic.

LEELA: And, folks, if she’s ever forced to use it – like when there’s no other option than bottled water or a plastic bag or spoon shudder to think she’ll use it as many times as she can, let me tell you.

MAMA: Absolutely. It’s perhaps one of the most wasteful things humans invented. And now building up to such massive quantities these non-bio-degradable things

LEELA: Yep, according to the World Wildlife Fund, it takes a plastic straw 200 years to decompose!

MAMA: And plastic bottles more than doubled that! And releasing toxic chemicals into our environment in the process.  That’s why we’re so happy with the news coming out of the UK.

LEELA: Yep, let’s cut across to our England correspondent Jackson Hosking for more.

JACKSON: Thanks, Leela. Sounds like my mom and your mom are in the same no-plastic club!

Well, for their sake – and the Earth’s! I’m very happy to announce single-use plastic items will be banned for takeaway food in England.

Scotland and Wales already have similar bans, so you could say it’s about time – even though it’s not yet clear when the ban in England will come into effect.

See, government figures suggest that more than a billion plastic plates are used every year and just thrown away.

And while this ban is for restaurants, these items are still being sold in shops and used at birthday parties, picnics and the like.

So, while environmentalists welcome the ban, many say it’s not enough.

They want even more measures in place to reduce the use of plastic.

In the south of England, I’m Jackson Hosking reporting for Newsy Pooloozi.

LEELA: Thanks a lot, Jackson!

MAMA: And finally… Let’s see what the lucky dip machine has in store for this week.

ODDBALL STING – VARIOUS VOICES: “Step right up, step right up… Have a go at the lucky dip machine… What’s it gonna be to

LEELA: So, as someone who loves to spend hours painting and listening to podcasts of course I can tell you that I sometimes ran out of paper or canvas sheets

MAMA: That is true.

LEELA: Yes, you know that cos i can asking you for that

MAMA: All the time…

LEELA: And for professional artists, well, canvases can cost a lot of money. But what do you do when the money in your country is worthless because of inflation?

LEELA: Well, cue the music, Mama. We gotta talk about art and money.

LEELA: Once upon a time – over the past few years – the value of money in the South American country of Argentina went down, down, down.

LEELA: So, the largest denomination of Argentine currency is the 1,000-peso bill. Sounds big, right?

LEELA: Well, it’s only worth around $5.60 officially and even less unofficially.

LEELA: Yes, way. He finds painting on even the most valuable banknote – the 1,000-peso bill – is very affordable. Because, he says, once he paints on it, he can sell it for much more than what the bill is worth.

LEELA: No, it makes good pesos!

MAMA: FAB FACT NUMBER 1 – Thousands of people squeeze into St Peter’s Square for the funeral of Pope Benedict, which was held in what country?

Vatican City – which is city-state surrounded by Italy

LEELA: FAB FACT NUMBER 2 – Pope Benedict was a groundbreaker because he was the first pope in how many years to retire?

MAMA: FAB FACT NUMBER 3 – A crater on may be full of opal gemstones, hinting that a lot of water might have been there. What is an opal?

A hydrated form of silica with a small water content that ranges from 3 to 21%.

LEELA: FAB FACT NUMBER 4 – England bans single-use plastic in take-away food, though it’s still available to buy in shops. According to the World Wildlife Fund, how long does it take a plastic straw to decompose?

MAMA: FAB FACT NUMBER 5 – Argentina’s cash has lost so much value in recent years because of skyrocketing inflation that a local artist finds painting on banknotes preferable to canvas. What’s the name of their currency?

And don’t forget, if you want to test yourself later on, then go to the Lucky Dip page of our website,  newsypooloozi.com, and take this quiz online!

LEELA: And that brings us to the end of this episode of Newsy Pooloozi!!!!!

LEELA: If you enjoyed this dip in the whirlpool of news and information then do subscribe to our podcast on Apple Podcast, Spotify, Stitcher, Alexa or wherever you get your podcasts.

MAMA: While you’re at it… Give us a good rating. Or better still, leave us a review!

LEELA: Alright then – we’ll see you next week in the giant, happy, splashy Newsy Pooloozi!