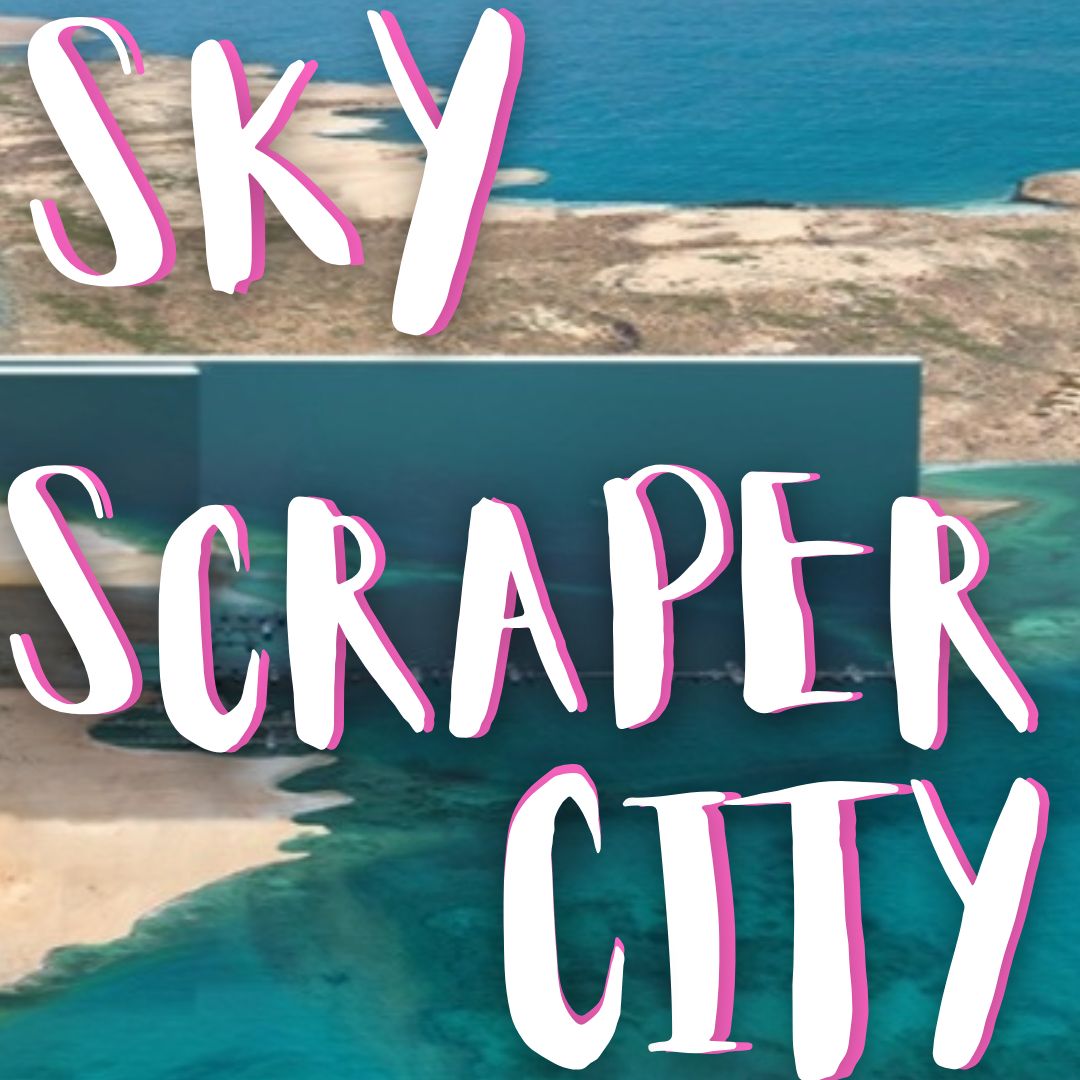 Cheetahs are being brought back to India…

And you won’t believe what pigs do in Belgium.

All this week on Newsy Poolooozi!

LEELA: Yes, animals are dominating the episode of Newsy Pooloozi this week.  But in case you think that’s all we got – OMG, have you seen the epic plans for a skyscraper city in the desert of Saudi Arabia?!

Hi – I’m Leela and joining me, of course, is my sidekick, producer and mama.

MAMA: Hello, hello and boy it’s good to be back, isn’t it?

LEELA: Totally. It was good to have a break, but it’s even better to be back!

MAMA: And with a bang.

MAMA: Yes, we are THRILLED to have made the prestigious Common Sense Media Best of Kids Podcasts lists.

LEELA: Two lists in fact – both the Great Podcasts to Listen to as a Family and Fun Podcasts for Curious Kids.

MAMA: We’ve been given the Common-Sense Media “selection” badge – which is…

MAMA: Seriously, we put our heart and soul into Newsy Pooloozi, so this is sooooo rewarding.

LEELA: Thank you, Common Sense Media! And thanks everyone for listening!!!

MAMA: Straight out of a sci-fi or Marvel movie – the Kingdom of Saudi Arabia is planning a new, futuristic mega city, called Neom, right on the edge of its desert along the Red Sea, which separates the Middle East from Africa.

LEELA: Imagine a skyscraper taller than the Empire State Building but – get this – over a HUNDRED miles long! Oh, and not just one, but two of them, face-to-face!

MAMA: With bridges and pathways linking the two structures, allowing people to go back-and-forth, but letting in loads of sunlight and air.

LEELA: And did we mention that the roof of these two massive blocks is, of course, a park.

MAMA: And that inside there would be loads of grassy landings, trees and bushes everywhere.

MAMA: And so far, it is just a dream, a design that will cost 1 trillion dollars as in a thousand billion dollars to actually create.

LEELA: That is a lot of money. But it’s meant to house 9 million people that’s like the population of New York City. Or half of New Delhi.

MAMA: But usually cities are sprawled across miles and miles, taking up loads of land. So this vertical city appropriately called “The Line” – would have a teeny tiny footprint in comparison.

LEELA: Not only would its residents be able to travel on a high-speed underground train in 20 minutes from one end to the other, but the idea is everything a neighborhood needs school, shops, work could all be accessed within a five-minute walk. How cool is that?

MAMA: There’s no denying this is super cool – we’ll have a link to the project in our transcript – but not everyone is impressed.

LEELA: Firstly, there are local, indigenous communities that are being moved.

MAMA: Secondly, Saudi Arabia isn’t known for having a great record on human rights, especially for women, who are given few freedoms.

LEELA: And did we mention that the facade, or outside, of the building is going to be mirrored? Stunning, yes. But… What about migrating birds? Ouch!

MAMA: But mostly the question is –

LEELA: Is the Line the future or just fantasy?

MAMA: Many times, we’ve seen grand plans for buildings, neighborhoods and “cities of the future” but seldom do they become a reality. They’re expensive and sometimes too creative to pull off. Saudi Arabia claims the project will be ready by 2030. That’s just eight years away.

LEELA: In eight years?! Some engineers say it could take almost half a century to be completed!

MAMA: Ok, listen up dog lovers, this one is for you.

LEELA: Meooooow. Cats are the best!

LEELA: (hisses) I’m just kidding cats ARE the best, but I like dogs too.

MAMA: Well, they seem to know how to understand humans at least how to interpret our intentions. For instance, researchers from the University of Veterinary Medicine in Vienna, found dogs know when we’re deliberately or just accidentally not giving them doggie treats and they wag their tails to prove it.

LEELA: Hmmm. How do they know this?

MAMA: Loads and loads of experiments. When researchers would pretend to be clumsy and drop food, the dogs would patiently wag their tails to the right. But when teased with treats but not given any, the clever canines would lie down, which dogs tend to do when they’re being forbidden food.

LEELA: In other words, the dogs knew! That’s pretty impressive.

MAMA: That’s not all the barking mad news I have. The Chinese Academy of Sciences reckons they can decipher some of that tail wagging.

MAMA: So, we know dogs wag their tails to convey a range of emotions. But now scientists are going deeper. By using a 3D motion tracking system, they found dogs tend to wag their tails to the right around familiar people. But when they don’t know someone, it’s a left wag. But as they get to know that person better, they’ll begin to wag on their right more frequently.

LEELA: Or they could just be saying, “Hey, familiar person, you dropped my doggie treat, come on”, already!

MAMA: US Speaker of the House Nancy Pelosi’s trip to Taiwan is causing a stir. The high-ranking Democrat met Taiwan’s President despite sharp warnings from China – which considers Taiwan a break-away territory.

One of America’s most wanted terrorists is killed in a CIA drone strike in Afghanistan. Ayman al-Zawahiri helped Osama bin Laden plot the deadly 9/11 attacks against America over 20 years ago.

Residents of the US state of Kentucky are being airlifted out of dangerous flooded areas after the region is hit by the worst flooding in decades.

And the Met Office, Britain’s weather service, said it’s official – sea levels in the UK are rising faster than they were a century ago and the higher temperatures creating summer heatwaves are the new normal.

And the jacket worn by US astronaut Edwin “Buzz” Aldrin on the historic Apollo 11 mission to the moon sells for a record $2.7 million dollars. It was part of the most valuable auction of space exploration items ever held.

LEELA: As ever, thank you so much for that whippity-whappity-zippity-zappity wrap of what’s making headlines elsewhere in the world, Mama.

LEELA: So more natural news now – some fast news closer to home for us here in India.

MAMA: And when Leela says fast she’s talking about the world’s fastest animal on land.

LEELA: The cheetah! Which used to roam around India for centuries.

MAMA: Sadly, hunting and loss of habitat means they’ve been extinct for some 70 years.

LEELA: But not any longer.

MAMA: As our New Delhi correspondent, Yuvraj Sahni, is about to tell us.

LEELA: Take it away Yuvraj!

Cheetahs – the fastest animal on land – can run up to 70 miles an hour.

The sleek wildcat used to roam from the Saharan desert in Africa across the Middle East to India.

But as human populations grew, the Asiatic cheetah began to lose its natural habitat.

And they were hunted down by poachers, never mind that they were also vulnerable to diseases.

There hasn’t been a cheetah in India since 1952. Well, now they’re being brought back!

Ok, not the actual Asiatic cheetahs. There are only a few of those left and they’re in Iran. But eight African cheetahs from Namibia are heading this way.

Soon the fast, spotted cat will roam freely at a nature park in the state of Madhya Pradesh – in effort to reintroduce the animal to their natural habitat.

They’re considered a vital part of India’s ecosystem as well as its heritage.

LEELA: Great news – thanks a lot, Yuvraj! So, Mama, if the cheetah is the fastest animal on land, what’s the fastest fish??

MAMA: Well, the sailfish – called that because of its massive top fin that looks like a sail, cruises through the water at 68 miles per hour. But black marlins have been clocked at 80 miles per hour.

LEELA: And finally, let’s see what the lucky dip machine has in store for us this week!

LEELA: Dancing all the way home!

LEELA: Don’t kill the music, Mama. This is what one Belgian farmer says his pigs do. Dance!

LEELA: It all began when Piet Paesmans’ son was singing in their barn.

As he sang, Farmer Piet saw his pigs wagging their tails.

No, this is not a “porky pie,” as the British like to call lies.

Soon he began to play recorded music – no offense to his son’s singing – and found that – surprise, surprise – when really peppy music was played, they not only wagged their tails but started moving and frolicking around.

And before you think all this dancing made them “sweat like a pig” – that’s a crazy phrase as pigs don’t actually have sweat glands, did you know.

Now scientists are getting in on the piggy playlist to determine if it’s just Piet’s pigs – or all swine who like to swing!

MAMA: FAB FACT NUMBER 1 – The Kingdom of Saudi Arabia is planning a new, futuristic mega city, called Neom, right in the middle of its desert, which is near what body of water which separates the Middle East from Africa?

Wagging their tails. To the right if they’re around familiar people, in fact.

MAMA: FAB FACT NUMBER 3 – Cheetahs are returning to India for the first time in more than 70 years. Cheetahs are the fastest animals on land – how fast can they run?

Black marlins have been clocked at 80 miles per hour

MAMA: FAB FACT NUMBER 5 – A farmer in Belgium finds his pigs like to wiggle their tails and dance to peppy music. But why don’t they sweat like pigs?

LEELA: And that brings us to the end of this episode of Newsy Pooloozi! Boy, it’s good to be back to weekly news!

LEELA: If you enjoyed this dip in the coolest pool of news and information then DO SUBSCRIBE to our podcast on Apple Podcast, Spotify, Stitcher, Alexa or wherever you get your podcasts.

MAMA: And why not tell a friend, or even a teacher, about us and our selection badge of honor from Common Sense Media?!

LEELA: You can find out more about us on our website –newsypooloozi.com.