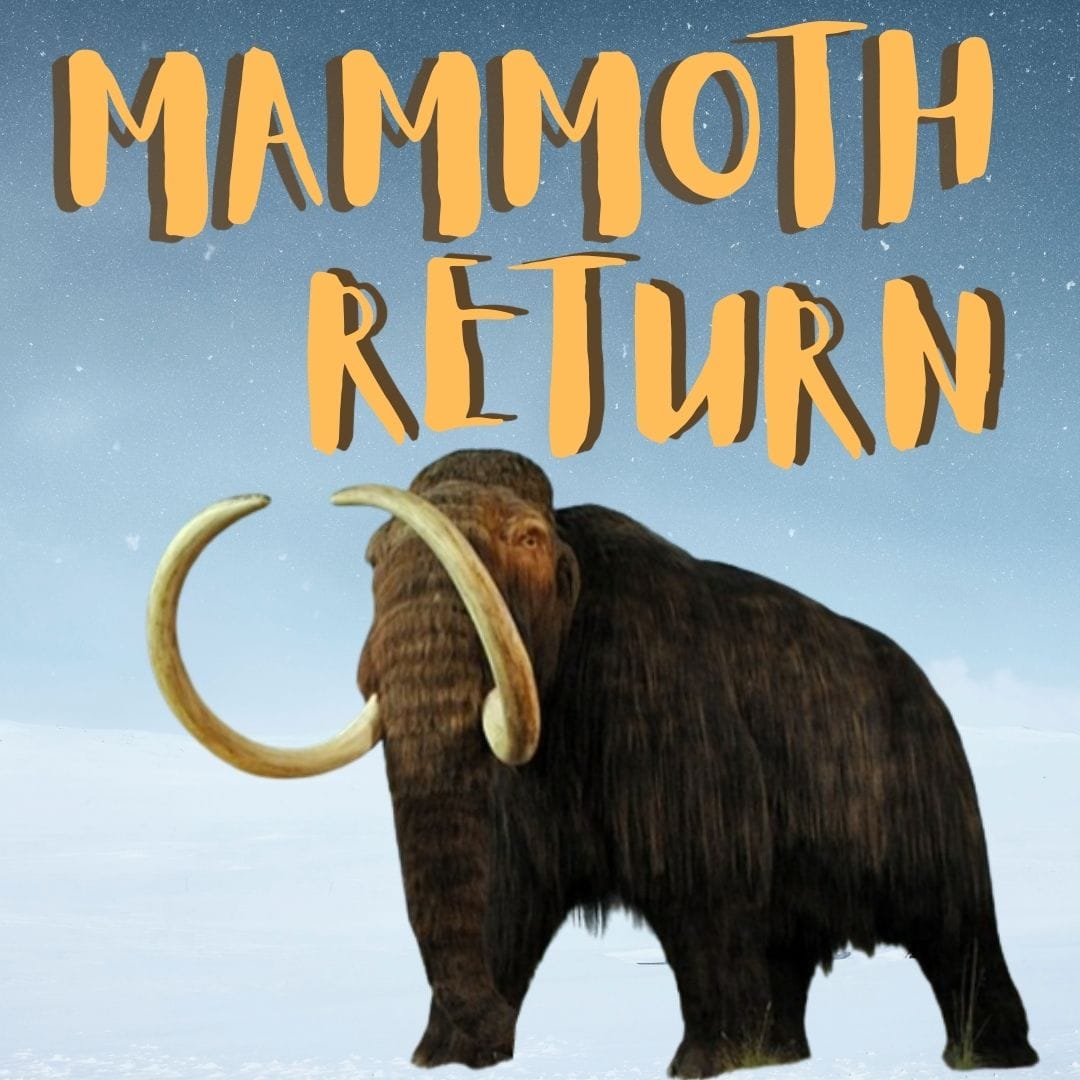 LEELA: Hello and welcome to the ONLY world news podcast for kids.

LEELA: And this is Newsy Pooloozi. In world news this week…

The big beasts of the ice-age are being resurrected in a lab. Yes, we’ll give you the low-down on the return of the woolly mammoth.

Plus, two bits of dinosaur news that might make you look at Jurassic Park a little differently.

And why is Australia talking about toad-zilla? Because a massive toad has been found down-under. We’ll tell you just how big, but you gotta listen till the end to find out more.

MAMA: If I say Siberia, what comes to your mind?

MAMA: Yes, seriously cold. But it used to be even colder.

LEELA: Uh-oh. Is this another global warming story?

MAMA: Nope. It’s about the disappearance of woolly mammoths.

LEELA: Oh! Those huge, but kinda adorable, ice-age animals that look like, uhhh, very woolly elephants but with, uhhh, much more mammoth tusks.

MAMA: Now you know where the word comes from, thank you very much.

LEELA: My pleasure. But, yep, I’m talking about 15-foot-long tusks – that’s like the size of a canoe! But, well, curled up and pointy at the end. Would not like to encounter that in the forest.

MAMA: Well, you wouldn’t be in a forest. They liked grassland. And those mighty tusks of theirs could easily uproot the trees that got in their way. And believe it or not, that winter grassland is actually colder than forests.

LEELA: What? I always think of forests, with all that snow clinging to the pine branches, as sooooo cold. I just get cold just thinking about it.

MAMA: Actually, the forests are not only darker, so they absorb more heat, but those snowy branches act like a big blanket, trapping in the thick layer of snow until summer comes of course and and…

MAMA: Bingo. That’s why a snowy, grassy plain is actually colder all year round. And it’s also why some biotech engineers want to bring back the woolly mammoth.

MAMA: That’s what they say. And with the help of gene editing technology, they reckon they can. Because the woolly mammoth shares 99.6% of the same DNA as Asian elephants.

LEELA: I did not know that.

MAMA: Neither did I.

LEELA: So that only leaves, wait, less than a percent actually point-four percent that makes an Asian elephant a woolly mammoth? Whoa… And I bet it’s the woolly fur and mammoth tusks!

MAMA: Right. The researchers from the Texas-based Colossal Biosciences lab will focus on the genes that make woolly mammoths cold-resistant.

MAMA: They think they can. But it’s unlikely to be precise. That’s why they’re saying it will be a “hybrid” woolly mammoth. This is called de-extinction. Of course, it has its critics from those who don’t think we should be genetically creating anything at all to those who think we should be concentrating on the animals on earth about to go extinct rather than reviving those long gone. And there are even those worried that the resurrected mammoth won’t have a mother to bond with.

LEELA: That’s not good. So, when’s this all gonna happen anyway?

MAMA: Well, the company says by next year they’ll have completed half the “edits” of an actual mammoth embryo. But really, they reckon it’ll be decades before the creatures are rewilded in the Arctic that means being able to roam on their own.

LEELA: Well, I would say watch this space, but ten years is quite a long way away.

MAMA: Indeed. It’s fascinating how we’re able to understand about Earth’s wild past just by piecing together a bunch of ancient fossils and bones, right?

LEELA: I know – it’s like we’re putting together a puzzle.

MAMA: Yes! But so many pieces are still missing and we don’t really know the full picture yet. So sometimes our portrayal of these craggy old beasts is just wrong.

LEELA: That’s why we’re going to our favorites dino-watcher to give us the latest news from the dino world.

MAMA: That would be Mirabel Power of the Book Power for Kids Podcast.

LEELA: Take it away, Mirabel.

MIRABEL: Thanks, you guys.

70 million years ago, dinosaurs big and small ruled all the continents of prehistoric earth.

Well, near you two in India there’s been a super discovery in the central state of Madhya Pradesh.

Nearly a hundred nesting sites have been uncovered of the long-necked titanosaurus which were the length of a school bus by the way!

The really interesting thing is how the nests were packed together so tightly near what would have been a river.

This was possibly because the eggs were…  abandoned!

The researchers think the titanosaurs did this in order not to crush their offspring while stomping around a narrow riverbed.

And not the only dino news this week.

Here in the US, a discovery was made that “slashes” the common notion of velociraptors.

You know, those intelligent packs hunted dinos in the movie Jurassic Park with “wicked claws” that slashed its victims?

New research shows that’s probably not what they used their sharp claws for.

Researchers reckon they were used to pin down their prey.

Not exactly a friendship hug, but not a slash either.

LEELA: Well, I’m glad we’ve cleared that up! Thanks a lot for that report!

MAMA: After months of debate and reluctance, the US and Germany are reportedly planning to send tanks to Ukraine, which hopes it will help them fight off invading Russian soldiers. But Russia said the gift was another act of provocation, like when someone says, “na-na-na-booboo!”

In warmer Africa, a royal tomb is discovered near Luxor, dating back 3,500 years ago to when Egypt was co-ruled by the female pharaoh Hatshepsut and her much younger stepson. Archaeologists found the tomb while exploring an area near the Valley of the Kings.

And Oscar nominations for Hollywood’s biggest awards in the movie industry are in and people in India are thrilled Naatu Naatu is up for best original song. The hit number from the Telugu-language film RRR has already won a Golden Globe.

LEELA: Well, thank you so much for that – let’s try something different this week: that whippity-whappity-zippity-zappity wrap of what’s making headlines elsewhere in the world, Mama.

MAMA: So, some people have loved it.

LEELA: Others have said… mehhhh.

MAMA: But that’s not stopped the buzz around the Avatar sequel.

LEELA: Avatar: The Way of Water.

MAMA: It’s stomping through the charts, becoming the sixth film to break the $2bn mark in worldwide box-office receipts.

LEELA: Yes, it’s now ahead of Spider-Man: No Way Home and Jurassic World on thelist of highest earning films. Ever.

MAMA: And many are predicting that it will overtake the next two films, Avengers: Infinity War and Star Wars: The Force Awakens later this week to reach No 4.

LEELA: That will mean the film’s director, James Cameron, will have directed three of the top four highest-earning films of all time.

MAMA: Those would be the first Avatar film at No 1 spot as well as the old soppy love story and historical drama, Titanic.

LEELA: And for those who say young people have no attention span this movie is 2 hours and 42 minutes long!

LEELA: This is odd and… gross! Creepy. Freaky. Warty. Or should I just say, today. (Yiiiick!)

MAMA: Oh, I’ll just get the music lined up, shall I Leela. Deep breaths.

LEELA: OK. I got this. So. Once upon a time. Just the other day. In that hotbed of God-forsaken wildlife known as Australia, far up in the north of Queensland at a place called Conway National Park, rangers were just out strolling along, as you do. When something caught their eye. Something that looked like, and I quote, “almost like a football with legs.” DUHN DUN DUUUUUUHNN!

It was, and I quote again, “a big warty, brown, ugly cane toad just sitting in the dirt.”

How big was it, you ask?

A whopping 6 pounds (or 2.7 kilograms). That’s like the weight of a Yorkshire Terrier dog. A frog the size of a small dog.

No wonder it was nicknamed “Toadzilla.”

MAMA: FAB FACT NUMBER 1 – A hybrid of the woolly mammoth could be roaming the earth once again thanks to gene editing technology, MOST of which became extinct when?

LEELA: FAB FACT NUMBER 2 – And how long did their mammoth tusks get?

MAMA: FAB FACT NUMBER 3 – Nearly 100 nests of the long-necked titanosaurus were found in the Indian state of Madhya Pradesh. What is a distinguishing feature of these beasts?

They have long necks, they are about the length of a school bus and they might have abandoned their nests so as not to stomping on them.

LEELA: FAB FACT NUMBER 4 – And when did dinosaurs roam the earth?

MAMA: FAB FACT NUMBER 5 – Avatar: The Way of the Water is becoming the sixth film to break the $2bn mark in worldwide box-office receipts. What is the highest grossing movie of all time?

Avatar – the first one

And don’t forget, if you want to test yourself later on, then go to the Lucky Dip page of our website, newsypooloozi.com, that’s pooloozi as in a swimming pool: pool-o-o-z-i, and take this quiz online in your own time!

LEELA: And that almost brings us to the end of this episode of Newsy Pooloozi! But first… We have more thank yous!

MAMA: Yes, we realise we’ve got a beautiful backlog of reviews on Apple Podcasts – like the one from DaBeach3, who wrote: “I love this podcast so much! It’s an easy, fun kid-friendly way to catch up on the news!”

LEELA: Thank you, DaBeach3. And jagwire who was short and sweet, writing: “It’s amazing.”

LEELA: So, why don’t YOU also leave us a review?

MAMA: It helps others find us but also gives YOU that warm and fuzzy feeling of being generous, taking a moment out for someone else and spreading some good cheer all around.

LEELA: We’ll read it out loud if you do! Alrighty then, see you next week in the happy, splashy giant Newsy Pooloozi!