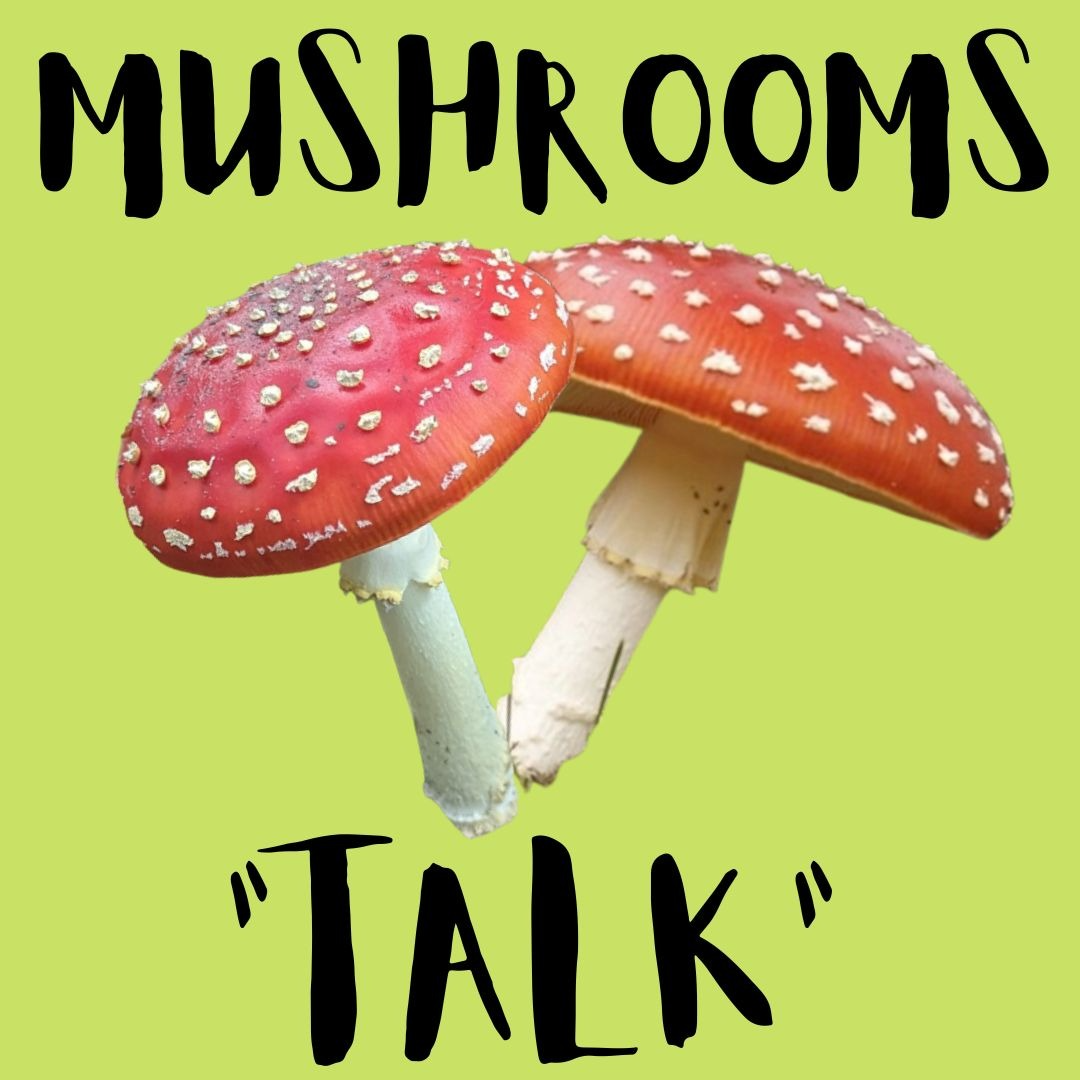 LEELA: This week… chatting mushrooms, tennis icons gone from the court, the “power” of disco fever and a dog’s dinner cafe.

LEELA: Hello and welcome to Newsy Pooloozi – the news pool for curious kids.

LEELA: And in world news this week…

Hear how scientists, who study fungi and mushrooms, give new meaning to the phrase “mushy talk.”

Tennis icon retire, but the game goes on.

And a restaurant in San Francisco caters to posh pups. Yep, you heard me right – but I bet you don’t believe me, do you? Well, you gotta listen till the end to hear this “dishy” story.

MAMA:  So, we’ve done an episode before about how a Canadian scientist discovered that trees talk. OR I should say can communicate with each other

LEELA: Yes, that would be episode 52, one of my favorite cover arts we’ve ever done, in fact.

MAMA: Oh, really? Me too! Totally worth checking out, y’all. But in a nutshell – trees are linked together by their roots.

LEELA: ANNNNND a massive underground network of fungi that helps them send messages.

MAMA: Exactly. So, I suppose it’s no wonder that UK scientists are now learning that fungi, or mushrooms, can also talk to each other.

MAMA: Uh, good one. Maybe not sweet nothings in each other’s ear, but they can communicate in a way that’s not that far from the way humans talk to one another.

LEELA: Ooooh, so how come we don’t hear them then?

MAMA: Well, of course, it’s not that simple! Let’s get Jackson Hosking, our England correspondent, to explain.

Not far from me at the University of the West of England mycologists who are people who study fungi, like mushrooms – have found fungi might be “talking” to each.

They might even have around FIFTY words in their vocabulary!!

OK, no, not words any of us humans could hear.

But using teeny-weeny devices that detect electrical signals, the mycologists were able to study the patterns of electrical impulses, or signals, they were emitting.

For instance, when the fungi find wood – which is what they feed on generally – they begin to light up with “sparks” of electricity in similar patterns to each other.

Scientists think the fungi are trying to spread the word.

Like, “Tea’s ready – come and get it!” – or something along those lines to other fungi.

SFX OF DINNER BELL AND “COME AND GET IT”

This is really cool because almost all living creatures – be it plants or animals (even those without a nervous system) – can produce these spikes.

But – get this – when fungi do it, it’s very similar to how we humans transmit information in our nerve cells.

This could really help scientists understand what fungi are up to.

We might just be able to understand them screaming, “Help! I’m in truffle!”

Get it? Truffle, that expensive type of fungi that people love to eat?

In the southwest of England, I’m Jackson Hosking reporting for Newsy Pooloozi!

LEELA: Oh, good one, Jackson. Very funny! Thanks a lot for that report. And – question for everyone… why did the mushroom get invited to all the parties?

MAMA: So, most of us like to turn on some music and move to the beats, right? I’m talking dancinng. You know – shake a leg.

MAMA: Yeah – well how else do you dance? Anyway – when “you’re shaking a leg” your body starts to warm up, right? Disco sweat.

LEELA:  Wait is that another phrase?

MAMA: Nope, just mine. Well, even though that’s not necessarily a nice image – you won’t believe what some Scottish geothermal energy consultants are doing with it – the heat, not the sweat.

MAMA: Yep. Geothermal energy – in case you didn’t know – is heat derived, or coming from, the sub-surface of the earth.

LEELA: I did not know that, thank you.

MAMA: Or in this case, heat derived from the dancers at the Glasgow arts venue SWG3. And guess what they’re doing with that heat?

LEELA: Oh… I think I know where this is going.

MAMA: Yep, I bet you know, turning it into clean – if not a bit stinky – energy to help power the music venue.

MAMA: It’s a little complicated but basically, the dancers’ heat is trapped and piped using something called carrier fluid to deep holes that can be charged like a thermal battery. The energy then travels back up to the heat pumps and is turned into a comfortable temperature for the club.

LEELA: Cool, talk about a good use of that “disco fever.”

LEELA: So, you’ve probably heard that in the space of just a few weeks, two of tennis’ greatest players have walked off the court and hung up their shoes…

MAMA: Yep, it’s the end of an era in tennis as our Indian correspondent and tennis enthusiast Sahasra Sridhar is about to tell us.

LEELA: Take it away, Sahasra. The ball’s in your court!

SAHASRA: Thanks, you guys!

First of all, the Rolex Paris Masters is happening! That’s an international tennis tournament that generally happens every year between October and November in Paris, France.

So many great tennis players have played there. But how is the game going to be the same without 2 of the game’s greatest names being there this season?

At 41 years old, which is really old for a tennis player, or any sportsman, for that matter, Federer has ruled the sport for 24 years, and played in more than 1,500 matches! That’s a LOT! Served the game for a long time, eh? Serve, like a tennis serve?!

After his final appearance in the Laver cup last month, he’s decided to retire. What a smash for his fans! Get it, smash, like a tennis smash shot?

And it’s not only his fans who’ll be missing him, but the entirety of the sporting world, and fellow sportsmen and sportswomen, like Serena Williams, another iconic tennis player who’s laying the racquet to rest.

After holding the world no.1 record for more than 6 years, Williams is deciding to retire.

These big names have secured and broken so many records in the history of tennis, it’s going to be a real game-changer without them – literally!

MAMA: Thanks a lot for that report. And here’s a fab fact for everyone… Did you know, according to the Britannica Encyclopedia, the origins of the game can be traced to a 12th–13th-century French handball game called jeu de paume (“game of the palm”).

LEELA: Have you heard the expression, “that place has gone to the dogs?”

LEELA: Exactly. Only in the case of one San Francisco café, it’s literally the case that it’s gone to the dogs.

LEELA: Well, it’s a city that by some measurements has a higher population of puppies than of new babies.  And with that kind of doggy love is no surprise people are willing to spend a LOT to pamper their pooches. Including fancy-pantsy meals at a restaurant that is JUST… for dogs!

LEELA: And when I say fancy, I’m talking $75 for a three-course meal!

MAMA: OK, honestly, that sounds a little bonkers brain to me.

LEELA: I know. I can see spending that money on cats. But dogs? Hmmph.  Well, the French chef – who is a dog lover, of course – admits it’s more for the owners than, perhaps, the dogs.

LEELA: You know the British have an expression for something that’s a total mess – they say it’s a “dog’s dinner.”  Well, this restaurant gives that expression a whole new meaning!

MAMA: You said it.

MAMA: FAB FACT NUMBER 1 – Scientists from the University of the West of England have found fungi might be “talking” to each. What are scientists who study fungi, like mushrooms, called?

MAMA: FAB FACT NUMBER 2 – The scientists noticed that the fungi light up with “sparks” of electricity in similar patterns to each other. True or false – this is very similar to how humans transmit information in our nerve cells.

Heat derived within the sub-surface of the earth.

MAMA: FAB FACT NUMBER 4 – Two of tennis’s finest athletes are hanging up their tennis shoes and retiring from the game that dates back to the French game called “game of the palm” from when?

MAMA: FAB FACT NUMBER 5 – A café is catering exclusively to dogs in what city that – by some metrics has a higher rate of puppies than children?

LEELA: And brings us to the end of this episode of Newsy Pooloozi!

LEELA: So – what did you think of this episode? If you liked it – why don’t you tell a friend about us?

MAMA: And, while you’re at it – if you’re feeling reflective and you have some time – why not fill out the Kid’s Listen survey – where you can tell the network that creates the best podcasting content for kids what you think about all children’s podcasts.

LEELA: The good, the bad and – alright if you must – the ugly.

MAMA: You’ll be helping the whole community make better content for you! Just click on the link in our transcript and show notes…