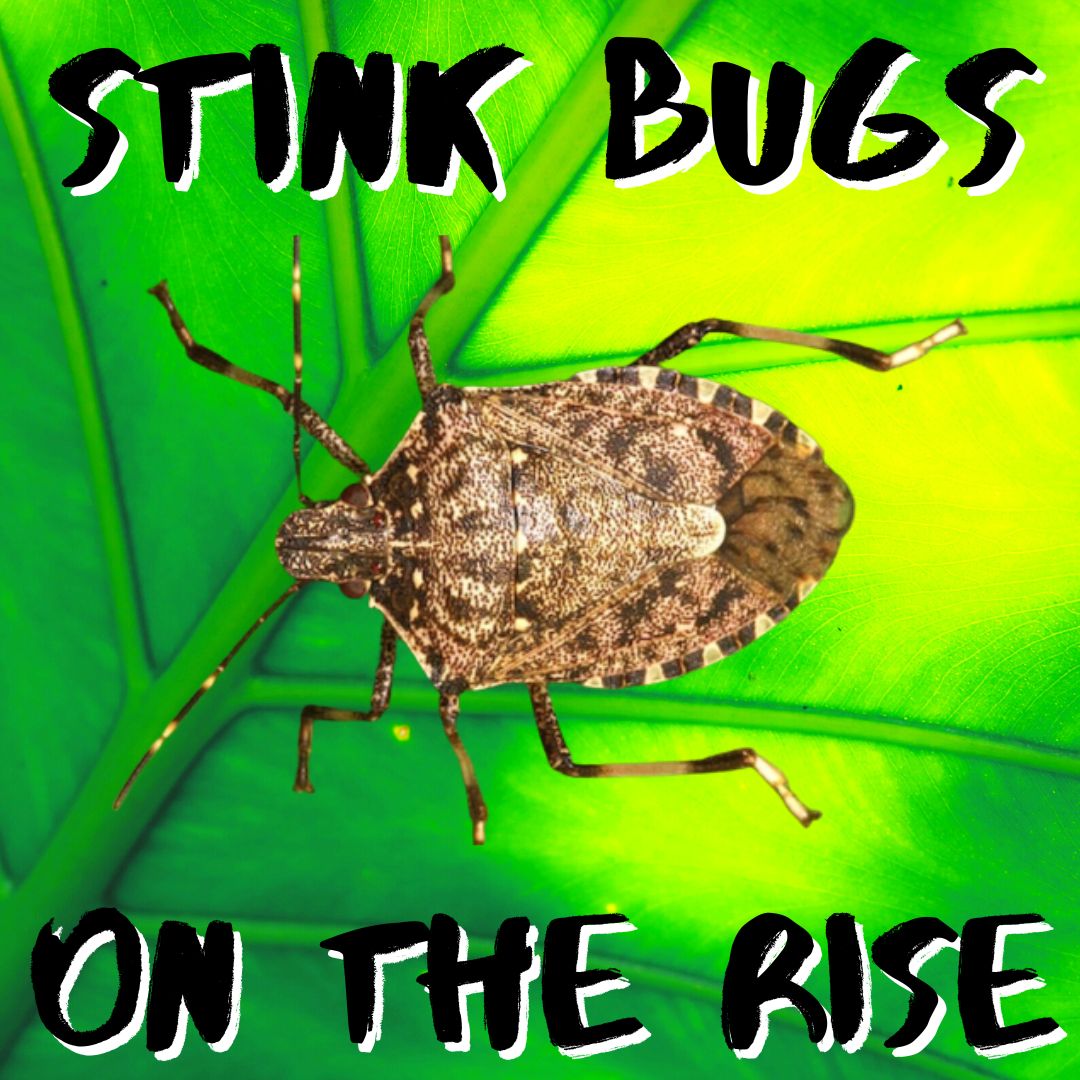 LEELA: This week on Newsy Pooloozi… It’s the invasion of stinkbugs and spider crabs, dog news, candy news and something special car made from scrap!

LEELA: Hello and welcome to Newsy Pooloozi – the news pool for curious kids and adults! I’m Leela, And…

LEELA: This week Climate change means crop-eating stink bugs are becoming a big pest in US, so are spider-crabs in France. Listen on to find out the smelly story.

In India you won’t believe what one young engineer built from leftover scrap metal.

Major candy news this week too – from a new M&M to a wardrobe change for Quality sweets.

And it’s official – dogs know when their humans are stressed – you gotta listen to the end to find out how!

MAMA:  So, as if climate change weren’t making our lives tough enough, global warming is also bringing out the creepy-crawlies.

MAMA: According to a study by Washington State University an invasive species of stink bug is becoming more widespread in the US because of climate change. And as we mentioned last week invasive means?

LEELA: Spreading quickly and taking over!

MAMA: Well, that’s true for the word alone, but now when applied to nature we tend to think of it more as when a plant or animal, that is new to an ecosystem, is changing the natural, native you could say, and balanced way that eco system it worked already.

LEELA: So, first things first – what is a stink bug and, ummm, why do they stink?

MAMA: Well, in nature most plants and animal develop ways of protecting themselves when threatened, right?

LEELA: Oh, sure. I hiss like a mad-cat and that usually scares people off. (Hiss)

MAMA: Yeah, that’s what you get when the only friends in the pandemic were cats. Right… Well, when stinkbugs feel threatened, they, you know

MAMA: Not quite, you know, so loudly, but yeah – they give off really nasty smell.

MAMA: They found that changing weather conditions may create a better habitat for the “brown marmorated stink bug” and everyone – especially farmers – should “prepare for change.”

LEELA: Prepare for “the invasion of the stink bugsssssssssss” – duun-duun-duuuunnnnn!

MAMA: Yep, they’re not just creepy to look at and stinky to smell, but they’re hungry too. They like to gobble up sweet fruit like apples, pears, cherries and grapes.

MAMA: Ahh well, and by the way the brown marmorated stink bug is an insect native to Asia. But it was discovered in 1998 in the US state Pennsylvania where it’s believed to have been accidentally introduced.

MAMA: Yeah well, it’s not just America that needs to brace itself for some depleting, or decreasing, food supplies thanks to creepy crawlies that like warmer weather.

MAMA:  All the way over in France it’s a similar story – but, luckily for your nose – it’s way underwater.

SFX OF SPLASH AND OCEAN

MAMA: an invasive species is also stressing out mussel farmers in France.

MAMA: No. I mean farmers in the northwest of the country who help propagate and fish the shellfish called mussels.

MAMA: I hear ya. Anyway, they say that the rising sea temperatures are attracting – wait for it…

MAMA: Spider crabs! And so many of them are destroying where mussels usually hang out.

MAMA: Something like that. Well, the mussel farmers are asking authorities to help.

LEELA: And do what? Go crab diving?

MAMA: I don’t know… But they say if nothing happens their industry could die out as there will be no mussels left to collect or eat.

LEELA: Oh, man. I do love me some mussels and fries…

Stink bugs spreading rapidly to new parts of US due to climate change, study warns (msn.com)

MAMA: This story is about a young engineering student from the south Indian state of Tamil Nadu who built something amazing out of scrap.

LEELA: Wait, from scratch or scrap?

MAMA: Well, both. He built it from scratch AND scrap.

LEELA: Oh, well, what did he build? A piece of art?

MAMA: Oh, no, something practical.

LEELA: Ummm… A device that butters your bread.

MAMA: No, that’s what children are for.

LEELA: Alright then. Take it away, Reyaansh.

We all know what upcycling is, right?

Making something out of junk.

But you’ll never guess what a mechanical engineering student, named A Gowtham has made from some scrap metal?!

And not just any car, but an environmentally friendly electric car.

You see, they might be more environmentally friendly than normal cars that burn fossil fuel, but they are super costly to make.

They require a lot of rare materials and precious metals.

Unlike big electric car manufacturers that have factories and lots of state-of-the-art resources, Gowtham created an electric jeep using scrap metal, with separate controls for the front and rear wheels.

Can you believe it?!

He even reached out to an Indian car manufacturing tycoon named Anand Mahindra, through Twitter, asking for a job.

Mr. Mahindra was so impressed – that he offered one!

WORLD WRAP STING – LEELA: “What’s that? I’ll tell you what. That’s the halftime bell! Which means… it’s time to hear what’s making news around the rest of the world. Hold on tight, it’s around the world in 80 seconds.”

In a surprise change of mind, tech billionaire Elon Musk says he’s willing to proceed with his takeover of the social media platform Twitter. And, yes, he’s agreeing to pay the price he offered months ago before trying to quit the deal.

One of the cheetahs brought to India last month as part of a scheme to reintroduce the wild animal back to the subcontinent – which we covered in Episode 110 – is thought to be pregnant. This is giving conservationists hope of a new cheetah population thriving in India after seven decades of local extinction.

And Jews around the world are marking their holiest holiday, Yom Kippur. It’s a day of fasting, of self-examination and asking for forgiveness.

LEELA: Well, thank you so much for that – wait for it… that whippity-whappity-zippity-zappity wrap of what’s making headlines elsewhere in the world, Mama.

MAMA: Anytime, Leela. Now we have an important announcement from our friends at Kids Listen, the podcasting network we’re a part of.

LEELA: Go on – let us know what you really think.

MAMA: Alright. We have some super sweet news for you, folks.

MAMA: So, one of the most iconic candies in the world.

LEELA: She’s talking M&Ms, everyone. An American candy that’s been around since 1941, if you were wondering.

MAMA: Thank you. And what colors make up a pack of M&Ms?

MAMA: Well, it is the first time a new color has joined the lineup in over a decade. And it’s designed to “represent acceptance and inclusivity.”

LEELA: For all of us purple types.

MAMA: You got it.

LEELA: But I think raisins Kinda got there first, you know?

MAMA: Oh, my gosh. You’re so right. All natural. No chemicals. Said the child.

LEELA: Hey, I like my chocolate. Just like my raisins and dried mango too, you know what I’m saying?

MAMA: Well, that’s not the only purple candy news. Our British and Indian listeners would know of Quality Street – their iconic purple box of chocolates individually wrapped in shiny pretty plastic

MAMA: Two billion pieces of plastic in fact, that often ended up on the floor, in the street, down drains and even when they were properly thrown away, they still sat – and sit – in landfills taking decades if not centuries, some say, to biodegrade.

LEELA: We’re happy to report the new wrapping will be made of paper and is completely recyclable. How’s that for “quality?”

MAMA: And finally, let’s see what the lucky dip machine has for us this week.

LEELA: So, we all know that dogs and cats are pretty smart and that they can tell when their humans are stresssssssssssssed. At least my lovely cat, Treasure, sure can.

MAMA: Oh, yeah. She gives you a wide berth – as in a lot of space – when she senses you’re stressed.

LEELA: Well, a recent study from Queen’s University Belfast in Ireland has found out HOW. Well, for dogs anyway. Cats are more mysterious, of course.

MAMA: Yes, their research suggests dogs can sense your stress through…

LEELA: More powerful than humans! Yep, so it’s no wonder they found dogs can smell the difference in their human’s breath and sweat when they’re feeling a negative emotion.

LEELA: You know what else is cool about this study.

LEELA: Well, it shows that when we are facing negative feelings of psychological stress our bodies have a physical response. It actually alters the odor of our breath and of our sweat.

LEELA: That’s why the dogs can detect it. Maybe humans too… Come here, Mama. How are you feeling today, huh? (Sniffs) I think I smell stress…

MAMA: (laughs) Get away from me.

MAMA: Give me some toothpaste please.

MAMA: FAB FACT NUMBER 1 – A study by Washington State University says an invasive species of stink bug is becoming more widespread in the US because of climate change. Invasive species means?

When a plant or animal that is new to an ecosystem, changes the balanced way it was working.

LEELA: FAB FACT NUMBER 2 – The brown marmorated stink bug is an insect native to what area of the world?

MAMA: FAB FACT NUMBER 3 – A young engineering student from the south Indian state of Tamil Nadu built an electric car made from scrap. This is known as which – waste washing or upcycling?

LEELA: FAB FACT NUMBER 4 – M&Ms are getting a new color for the first time in a decade – purple – when did the candy first come on the market?

MAMA: FAB FACT NUMBER 5 – A new study shows dogs can smell when we’re stressed out thanks to their powerful nose, which can smell how much more than the average human?

MAMA: Profuse apologies for two reviews we didn’t read out when they dropped a few weeks back…

LEELA: First it’s DeBeach3 – who gave us five stars and said: “Amazing podcast! I love this podcast so much! It’s an easy, fun, kid-friendly way to catch up on the news!”

MAMA: Annnnnnd Paybear who also says: “Always like listening to Newsy Pooloozi and learning something new every time. Amazing how they can find new interesting topics beyond only current events. Totally Enjoyable for sure.”

LEELA: So, what are YOU waiting for – please do rate us and leave a review.

MAMA: We’ll read it out loud if you do!