Eww la la, we were live on Miss Malini! 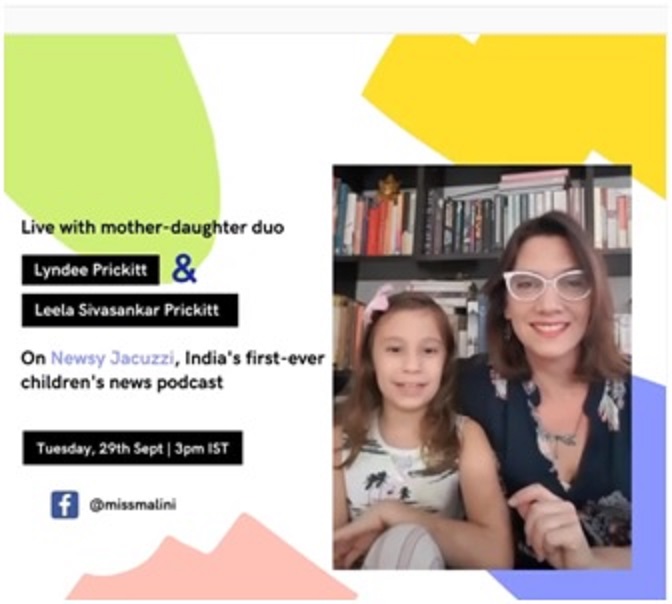 We were pretty excited (and a wee bit nervous) to be interviewed live on Miss Malini’s Facebook page on Tuesday, September 29. Miss Malini is one of India’s most popular lifestyle gurus with some 2.7 million Twitter followers and an extensive website that covers Bollywood and Indian TV news, fashion and culture.

Needless to say, we were a little nervy leading up to the Facebook Live. I was fighting with a slow laptop and a sweaty face, since the room with the best Wi-Fi has no AC and it’s still in the high 30s (that’s nearly 100 F) for us in Delhi.

“Why are you so nervous?” I asked, Leela, who was fiddling with a glam mama-necklace she decided to wear at the last minute. “Come on. You’ll be great! You record your own podcast every week.”

“Yeah, but that’s under our bed and I can mess up as much as I want – you just edit out the mistakes. But this live, Mama!”

She had a point. Luckily we were in the bindass* hands of Miss Malini’s Content Editor, Alisha Fernandes, who relaxed us immediately. We were so stoked that she liked our podcast name (!) and all the cool sound effects that go into the 5-6 stories we produce on the weekly podcast.

It was heartening that the Miss Malini team was almost as passionate as we were about bringing a wider variety of news to people. In nearly every episode of Newsy Pooloozi we have something from the “world of wow” – in other words science – whether it’s serious news about melting glaciers or exciting plans to build a sea station or the endless space news that makes most kids, and many adults as it happens, go “Wow!”

Leela was also delighted to discuss her favorite Newsy Pooloozi segment – our “Odd Ball” story that we ends each show. It’s always a story that makes your jaw drop (“down to your toes” as Leela loves to add). In that segment we’ve covered the story of the Botswanan cows that have heads painted on the backsides (“head butts” to be frank) to ward off hungry lions, the German train company that asked passengers not to use deodorant in hopes their smelly armpits would encourage correct mask wearing, the sly Berlin fox and thieving Pennsylvania cat that keep stealing people’s shoes and the leopard that casually walked into a swanky South African hotel while guests were eating breakfast.

That’s a lot of animals, right? But one thing we’ve discovered doing Newsy Pooloozi is just how many fun and intriguing animal stories there are in the world that don’t get much coverage in mainstream media. And I guess that’s why more and more people are tuning in to us. We’re offering something a little different and a lot of fun!