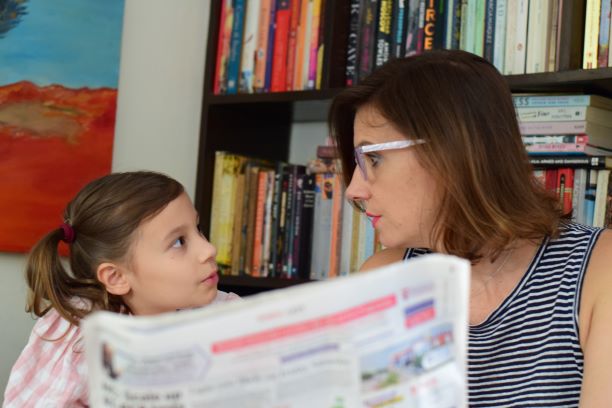 That sounds like an overly ambitious, not to mention poncy, prospect, doesn’t it? Or possibly even a scary one. But actually, once you’ve embraced the notion that a regular dose of news is actually good for kids (really!), the question is how, right?

The most obvious – but risky – way is to let kids hear or watch the news with you and then talk about it together. It’s risky because topics you might not want your kids to be exposed to just yet (like extreme violence) can come without warning, fast and furious. But, if you have older or more mature kids, then watching the news together can be a super chill way of introducing current affairs into the conversation.

But that’s the key – the conversation. Whether you’ve watched something together or you just want to introduce some cool news you’ve read, conversation is key. Like anything with kids, if you’re interested and animated about something, chances are they will be too.

Easier said than done? Well, first of all start with news that impacts (however tenuously) you and your kids life. Such discussions are a great way to make them feel grown-up. But also look into their areas of interest – sport, fashion, video games, birds, rocks, baking, Disney, you name it. News happens all the time in every field.

But mostly, I rely on a big trick when I’m trying to fire up Leela and her cousins about some story. I call it the relatable spectrum – many stories are either going to be something a child can relate to (with heavy dose of simplification and metaphors) or totally bonker-brains, unusual stuff they just gotta hear.

As with most aspects of my parenting (and my journalism, actually), I’m always looking for that analogy or metaphor that makes a story relatable, because that’s the biggest hook I have to draw people into the story. In other words, how could that story – at its core conflict – play out in their world?

To take an extreme example, police violence or a military coup are kind of like those bullies at school. Only a hundred times worse, of course, which when they were little I would leave to their imagination, but as they’ve grown up I dish the details out cautiously, gently. Chances are they’re going to hear some version of it anyway – so I like to get in first with the verified facts. Another example is the economy taking a nose-dive being like losing a quarter of your allowance. You get the idea.

Is it over-simplification? Yep. They’re kids. And one can judge how simple to make it judging by how mature they are. Or how wide their eyes get or, even, how quickly they glaze over. And what about those stories on the other end of the spectrum, which they feel they can’t relate to at all?  Well, embrace the odd.

Kids love the unusual, the wacky, the odd. And the news is full of them. And I’m not just talking about the man-bites-dog extreme end of wacky, but the world of science, nature, tech and culture are full of “out there” happenings. (Just check out any one of our podcasts and you’ll almost always get two or three examples of stories that make your jaw drop just a little or a lot.)

Embrace the unrelatable: head-butt cows in Botswana, San Diego’s robot squid, the Swiss factory malfunction that led to cocoa snow, the German fox that steals shoes, the chicken nugget that went up to space… and more!

It has been an eye-opener to find out just how much mainstream media ignores these fabulous stories. No, they don’t bring down governments or make the stock market move. But not all news has to be about politics or the economy (never mind crime).

Expanding your definition of news is the way to get kids fired up about what’s happening – both in their neighborhood and the world.

One of the most gratifying aspects of producing Newsy Pooloozi with my daughter, Leela, has been watching her interest in news and current affairs grow organically. Yes, it started with me as the “news editor,” short-listing stories for us to pick and choose, but about five months in guess what? She started emailing me suggestions herself! And, yep, most of them were either about space (her preoccupation) or goofy oddballs, but some were straight-up stories, like the Indian windmill creator, that simply piqued her interest.